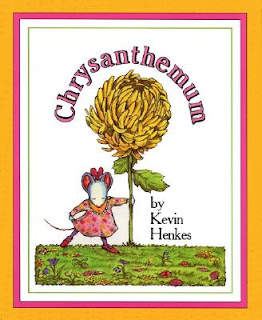 A little girl mouse named Chrysanthemum is proud of her unique name until she starts school and the cold harsh reality of social pressure causes her to second guess her name's uncommon beauty. Henkes (as always) displays a deft touch in portraying the psychological distress that a school yard can cause in a young child. He also, through subtle details in his illustrations (a book title here, a raised eyebrow there), captures the piqued anxiety that comes with parenting. No responsible parent wants to cause their child any undue harm.

Case in point: According to data collected by the Social Security Administration, the name "Katrina" has dropped 100 spots in the list of most popular names. Obviously, people are wary of having their child associated with such a devastating storm. Experienced Social Security officials knew this coming, as this is not the first case of a name being sidetracked by a disaster. Some other notable examples are:

Hurricane Gloria: After the hurricane viciously attacked the Atlantic Coast, the musical career of Gloria Estefan took a sharp nosedive. Fans simply could not stomach the cruel irony of brutal natural devastation and feel good snyth-pop carrying the same name.

Chernobyl: Decades after the tragic implosion of the duo Sonny & Cher, the mutant-like Cher attempted to release a concept album called Cher-Noble to pay tribute to the victims of the cataclysmic nuclear explosion. In a rare moment of clarity, studio execs decided that it was in poor taste and vetoed it. In a more typical moment of sheer madness, they decided to unleash the album anyways a year later as simply, Cher.

Mt. Vesuvius: Have you ever met anyone named Vesuvius? Me neither.

The Fall of Paris: Given the horrifically ridiculous life trajectory of Paris Hilton, the name has been virtually retired for humans. It has, however, experienced a resurgence among the names of small toy-sized dogs. According to the National Kennel Club, 73% of all dogs carried around in purses are named "Paris". The other 27% is evenly split between "Cooper," "Schmoopykins" and "Rat-faced Uggo."
at 10:48 AM

Email ThisBlogThis!Share to TwitterShare to FacebookShare to Pinterest
Labels: Aalphabetical: C, Family Matters, Judging a Book By Its Cover, Kids These Days