Not all Bunnies and Birthday Cake: Experts on the State of Picture Books (@BookRiot)

This post originally appeared at Book Riot.
The national news may not have picked this up, but there was an important story out of DC last weekend. Gathering in our nation's capitol, a panel of experts declared that the picture book is in fact alive and well. The panel was held at Politics & Prose (DC’s preeminent independent bookseller) and featured some of the heaviest hitters in the industry: leading children’s literature scholar Leonard Marcus, editor Neal Porter, authors Jon Scieszka, Meg Medina, and Mac Barnett and author/illustrators Christopher Myers and Laura Vaccaro Seeger.
Now, if you expect a picture book panel to be all fluffy bunnies and birthday cake, then you would have been terribly disappointed. However, if you’re looking for an erudite discussion about the future of picture books with topics ranging from David Foster Wallace to nipples, then my dear friend you came to the right place.
Seated before a full house on a sunny Sunday afternoon, the panelists wasted no time taking a deep dive into the key issues of their field. For those who don’t have the good fortune of living near Politics & Prose, here are some highlights from the sprawling 90-minute conversation.
(Disclaimer: all quotes should be considered paraphrasing because while I did take notes, my handwriting makes chickenscratch look like Lucida Calligraphy.)
It was only a matter of time though before the conversation took its inevitable turn to fluffy bunnies and birthday cake—but not how you might expect. Scieszka and Barnett are collaborating on a new book. The concept is that a child receives a book called The Birthday Bunny, the most trite, cloying book imaginable (which Scieszka and Barnett wrote by “turning off their brains”).

The kid then takes it upon himself to alter the text and pictures, transforming it into the book he actually wants to read: The Battle Bunny.
This is a fun concept that kids can relate to that just happens to feature a complex layering of visual and written language and challenges children to consider (consciously or otherwise) the intricacies and possibilities of narrative. This is both kid’s play and not--and exactly what makes me love the world of picture books.
The field is filled with these incredibly innovative and passionate thinkers who are very serious about their craft, but do not take themselves too seriously. As the panel ended and the crowd dispersed, one thing was abundantly clear: while we may not be able to predict the future of the picture book, we do know that it is in very good hands.
at 9:03 PM No comments: Links to this post

With Gatsby finally about to hit theaters, I couldn't resist putting together another mash-up.  CLICK HERE for the full post at Book Riot.

Now, the story of the wealthy friends who had everything and the one man who had no choice but to tear them apart.  It’s… The Great Gatsby.

Great list here from all the BookRiot contributors.  My choice for the month was: 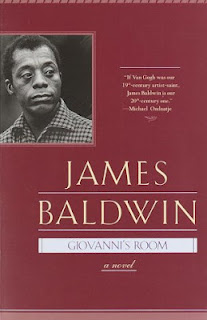 Giovanni’s Room by James Baldwin
There’s a great passage early on in Giovanni’s Room that’s incidental to the plot, but provides key insight into the main character, David.  He’s describing a car crash in which he was the drunk driver, but he tells his story completely in the passive voice:  “something weird happened to all my reactions”, “the car sprang suddenly out of my control”, and finally “a telephone pole, foam white, came crying at me out of the pitch darkness”.  Through this narrative alchemy, David manages to separate himself from the responsibility for his actions.  He didn’t so much cause the accident as the accident happened to him. As the story unfolds, you see David repeatedly rely on this self-preservation tactic.  He may feign self-loathing as he wreaks havoc on the lives of those around him, but whether he is steering friends into a tree or driving his lover toward tragedy, in his mind David is never truly at fault—he is merely the victim of circumstance.