Guess How Much I Love You

This classic is one of those quietly perfect books, a true masterpiece where the tone, pacing, and illustrations hit the right note each time. In it, Little Nutbrown Hare and Big Nutbrown Hare go back and forth telling the other one how much they love eachother, playfully trying to outdo the other.

Little Nutbrown Hare uses his arms, legs, toes, and whatever else he has at his disposal (i.e. "I love you as high as I can reach,"). It is the nature of love that we use whatever we can find to demonstrate it. For those of us who are artistically inclined, it may come in the form of a painting or a drawing. Or if you fancy yourself a writer, then maybe you'd write a beautiful love poem.

Or if you happen to be one of the greatest rock guitarists to ever live, I guess you'd write an immortal song. Check out this unbelievable story I read in The Week: 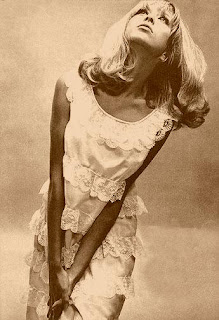 Pattie Boyd (left) inspired two rock 'n' roll legends to create their most beautiful music. In 1969, her husband, George Harrison, wrote his biggest hit, "Something," for her. A year later, their good friend Eric Clapton drew her aside. "He played me the most powerful, moving song I had ever heard," Boyd tells the London Daily Mail, "It was 'Layla,' about a man who fall hopelessly in love with a woman who loves him but is unavailable. He played it to me two or three times, all the while watching my face intently for my reaction. My first thought was, 'Oh God, everyone's going to know this is about me.'"

Boyd had rebuffed Clapton, but he kept trying, and told Harrison, "Man, I'm in love with your wife." One night, Clapton arrived at Harrison's house drunk, and the two men decided to fight over Boyd--with music. "George handed him a guitar and an amp, as an 18th-century gentleman might have handed his rival a sword, and for two hours, without a word, they dueled. The air was electric and the music exciting."

Wow. Can someone PLEASE build a time machine now? If only to go back and record that epic guitar duel between the two drunken masters and post it on YouTube for the rest of us to see, it would be worth it.

Oh and how does the story end? Well... you know that lyric from Something that goes:

Apparently her smile doesn't know shit, because "A year later, Boyd left Harrison when she realized he was sleeping with Ringo Starr's wife. She wound up in Clapton's arms."

Moral of the story: It's time to stop guessing how much they love you and time to go back and check all your old love letters for grammatical loopholes before you find yourself in for some hard day's nights.
at 9:23 AM

"It's time to stop guessing how much they love you and time to go back and check all your old love letters for grammatical loopholes..."

This from the man who told me there is no Santa Claus. Now there's no Cupid, either!?!?!?

It's not that Cupid doesn't exist... it's just that he's now a marketing consultant for Viagra.

A little bit of trivia: if you're looking out for her, you can spot Boyd in at least two scenes in "A Hard Day's Night"-- she's in the train car where Paul McCartney goes over to talk to girls, and also in the scene where the Fab 4 are fleeing (she's pressed up against a train wall). Quite the cutie, that Pattie Boyd.

Personally, as a parent I have always hated "Guess how much I love you." Little Nutbrown Hare is trying to say something important to Big Nutbrown Hare and BNH just keeps on one-upping him instead of just saying "Wow, it's great to know you love me so much. I love you too." BNH is just a macho Big Nutbrown Jerk!

I agree this one goes in the category of Runaway Bunny and Love You Forever in my book. I will crush your independence with my ego.

This looks like a job for (bum bum BUM!) Lynn Truss of Eats Shoots and Leaves fame. She will set the world straight.

Ok so I have a bunch if key loggers and Trojans as of 1 hour ago and I need to know weather I should system restore or something help [url=http://gordoarsnaui.com]santoramaa[/url]

my computer has a virus called malware defense ( a fake antivirus program ) it won't let me download any new antivirus ssoft or let me run any scans. It makes my computer slow and it won''t do away. plus it says there are lots of other viruses and spyware on my computer ( which i don't know if it is true or not) but i want to get rid of them if there are so i want to erase everthing on my computer how can i do that? [url=http://gordoarsnaui.com]santoramaa[/url]

I was wondering if you ever considered changing the structure of your website? Its very well written; I love what youve got to say. But maybe you could a little more in the way of content so people could connect with it better. Youve got an awful lot of text for only having one or two images. Maybe you could space it out better? singapore web design price

Terrific post but I was wondering if you could write a litte more on this subject? I'd be very grateful if you could elaborate a little bit further. Thank you! website design and development

I must show some appreciation to the writer just for rescuing me from such a incident. As a result of researching through the the web and meeting concepts which were not pleasant, I was thinking my life was gone. Living without the presence of strategies to the difficulties you have sorted out through your good blog post is a critical case, and ones which might have in a wrong way damaged my career if I hadn't discovered your web blog. That know-how and kindness in playing with every part was very useful. I'm not sure what I would have done if I had not encountered such a stuff like this. It's possible to at this moment relish my future. Thanks so much for the high quality and sensible guide. I won't hesitate to refer the sites to anyone who should get guidelines on this topic.
seo agencies singapore

Howdy this is kind of of off topic but I was wanting to know if blogs use WYSIWYG editors or if you have to manually code with HTML. I'm starting a blog soon but have no coding expertise so I wanted to get advice from someone with experience. Any help would be enormously appreciated!
branding company singapore

Sometimes people likes different things in their life, Few of them are concentrate on their body fitness and healthy life. This is a good thing, because around the world many men are suffering from ED problem. This issue is easily overcome by using order sildenafil oral jelly online. This jelly eliminate ED problem within an hour.