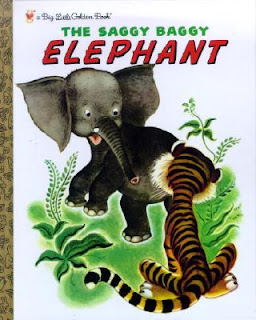 Written in 1947 as part of the Big Little Golden Book series, the Saggy Baggy Elephant is the harrowing tale of an elephant who cannot escape the social pressures to keep a slim and trim figure.

Our story begins with a happy little elephant dancing through the jungle. Happy until an obnoxious parrot begins to make fun of the elephant for its sagging skin. Suddenly the elephant becomes extremely self-conscious about its appearance and considers a series of drastic measures to try to improve itself.

Despite the fact that the television age was still in its infancy in 1947, literary critics maintain that the Saggy Baggy Elephant was written as a prophetic warning about the effect of television (the parrot symbolizing the squawk box/tv) on our self-image and predicted the resulting rise of the plastic surgery industry (and in the case of some disturbing reality television shows, the apocalyptic combination of the two). In 2002, a letter to the editor of Jack & Jill Magazine (signed mysteriously as only K.J.) was published in the March edition of the magazine. Below is a revealing excerpt from the cryptic and rambling letter.

"Even in the early days, I could see the dangerous influence of this little box that would soon be the centerpiece of everyone's living room. Say what you will about the flaws of a patriarchical society, but is it any better to replace the father figure with the television as the most revered and most listened-to family member? Television is a vehicle for the vast marketing machine, a machine that is only successful if it convinces us that was are in need of something. This can come in the form of a new car, a new toy, or even a new body. People make the mistake of assuming that commercials are the only things trying to sell us something. This is naive. Every image that comes on that screen is constructed to make you want. Every second is designed to entice you to consume. Each attractive person that saunters across the screen is another straw on the camel's back, weighing him/her down with the burden of unrealistic expectations. The sad truth behind the Saggy Baggy Elephant is that with television's satanic voice incessantly chirping in our ears, presenting us with skewed visions of physical norms, it is only natural that the we develop acute neuroses about our bodies."

(Note: If the author of the letter is indeed Kathyrn Jackson, it should be noted that she wasn't exactly Rita Hayworth... so the preceeding rant may just be a case of sour grapes.)

But back to our story about our saggy baggy pal. The elephant, newly aware of its short comings, is presented with a series of remedies, each of which has dangerous side effects. This is the part where Jackson truly earns her keep as the modern day Nostradamus of picture books:

1) A hungry tiger offers to bite off a few pounds for the elephant--a blunt symbolic representation of the modern medical procedure known as liposuction.

2) The elephant tries soaking itself in water to shrink its skin--a reference to the disturbingly popular botox revolution.

3) Finally, the elephant foresakes all of these quick-fix remedies and hides in a dark cave--which eerily predicts next year's Hide All Ugly People In A Dark Cave Initiative that will be passed by a near unanimous bipartisan vote in Congress (Senator Joe Lieberman will abstain for obviously self-serving reasons... let's just say you won't find him in People Magazine's Sexiest Men Alive issue any time soon).
at 10:08 PM

Email ThisBlogThis!Share to TwitterShare to FacebookShare to Pinterest
Labels: Aalphabetical: S, Judging a Book By Its Cover, Old School Classics, Wild Animal Kingdom, With Friends Like These...

I kinda have been expecting this in a way...
But I reali dun think da world is going to end...start a new era maybe but the world is not ending.
That's not gonna happen till a thousand years later! Ok, I'm not sure bout that either but that's not the point! The world's not gonna end! Full stop!
[url=http://2012earth.net
]stop frighten
[/url] - some truth about 2012

We do not agree with this year BRIT awards 2010 decision.

Lady Gaga can not be better than Nina Hagen