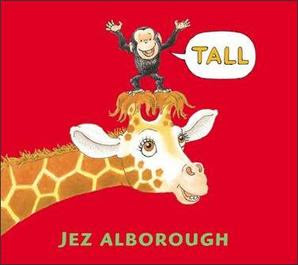 In Alborough's latest installment, Bobo the unbearably adorable monkey is tired of being small. In order to rectify his lack of height, he climbs on top of a rock and declares himself "Tall"! Predictably, his newfound status merely feeds his desires... the insatiable Bobo then climbs a lizard, then a lion, then continues to climb on top of progressively larger and larger animals. This little Napoleon is so blinded by his ambition and his delusions of grandeur that he does not pause to consider who he must trample on his way to the top. In the end, he finds himself mounted on the head of a giraffe, towering over the other animals of the forest. Having reached such great heights, he triumpantly screams "Tall"!, his little voice shaking the heavens. Unfortunately for him, the Gods are listening to the self-delusional little monkey and decide to punish his hubris by toppling him from his lofty perch. Fall!

Bobo's story, while tragic, was virtually inevitable... Bobo's self-image neurosis is merely a by-product of current social norms. Poor little monkey never stood a chance. In today's society (where bigger is better, and more is... well, more awesome), we are taught to embrace dissatisfaction as a virtue that drives us towards success. How else can you explain Bill Gates' unparralleled journey to the top? A nerd like him? He must have a bottomless tank of insecurity to fuel his rise to world domination.

And Gates isn't the only successful entity that still feels the bitter sting of insecurity. Even the largest multinational corporations are not immune to these persistent feelings of inadequacy. Take Starbucks. It is everywhere. Seriously, you're probably sitting in one right now and you didn't even realize it. Yet, despite its virtual omnipresence, Starbucks still suffers from self-doubt and inadequacy... as evidenced by the fact that they feel the need to call their small coffee Tall. Honestly, who do you think you're fooling? Like Bobo the monkey, in the end you will realize that you are only fooling yourself... and the millions of people that continue to buy your mediocre coffee.

1) Have a Positive Self-Image: Be happy with the body you were given. Don't try to fool others because you only end up fooling yourself. So, for your own good, to escape the perverse cycle of insecurity, avoid magazines like Cosmo, Men's Health, and Maxim at all costs... they will only mess with your mind. And while you're at it, you might as well steer clear of Guns & Ammo and Better Homes and Gardens too.

2) Beware the False Promise of Success: Achievement is not the magic pill that will cure that aching sense of unfullfillment. Success does not necessarily lead to satisfaction... but then again, neither does sitting on your ass watching TV. There's a fine line between positive upward mobility and ruthlessly blind ambition... just as there is a fine line between contentment and complacency. So what should you do? I don't know... just be careful not to replicate Bobo's fall from grace. Afterall, Monkey See, Monkey Do. Whatever that means.
at 9:00 AM

Email ThisBlogThis!Share to TwitterShare to FacebookShare to Pinterest
Labels: Aalphabetical: T, Judging a Book By Its Cover, Kids These Days, Wild Animal Kingdom

This is a great message. There IS too much energy and thought given to body image, what ifs, and the other side's greener grass. I say we embrace our uniquess! Embrace it with as much might as our girl-like (yet artsy) fingers can muster!