[Note: This is not an April Fool's Day gag.]

My buddy Farida over at Saints & Spinners came up with the idea to have a great contest and asked if I wanted get in on the action. My immediate answer was "Yeah!"... and then after giving it some thought, my answer was "Heck Yeah!"

So go over there and CHECK IT OUT and get your creative juices flowing! You have until April 10th. If you come up with one of the three winning entries, I will do my best to illustrate (or photoshop-ustrate) it!

Plus, the winners will get their choice of prizes... an awesome homemade doll/action figure (a Farida original), a Jim Henson dvd, or this random painting of a robot! 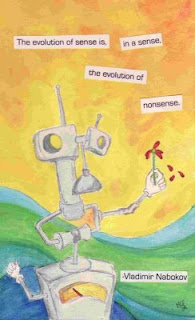 In A Moveable Feast, Hemingway talks about the life of a writer, saying that "All you have to do is write one true sentence. Write the truest sentence you know."

I wonder if Dr. Charlotte Cowan had this in mind while writing "The Moose With Loose Poops". How else could she construct a sentence as devastatingly honest as:

"A waterfall's coming out of my bottom!" 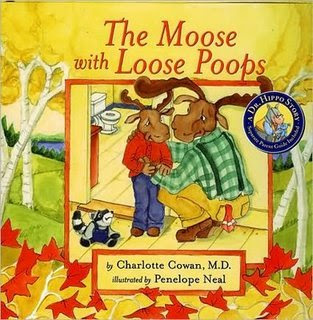 One of the following is an award winning children's book. The other seven are all part of the collected fictions of Jorge Luis Borges. Can you spot the children's book?

a) The Improbable Impostor Tom Castro
b) The Widow Ching - Pirate
c) Man on Pink Corner
d) The Two Kings and the Two Labyrinths
e) Hakim, the Masked Dyer of Merv
f) The Garden of Abdul Gasazi
g) The Night of the Gifts
h) The Approach to Al-Mu'tasim

(Though, if you read the book you'll see that it's very possible that it was stolen from Borges... either that or Borges snuck in through a window at night and whispered the story into the author's sleeping ear.)
at 9:32 AM 4 comments: 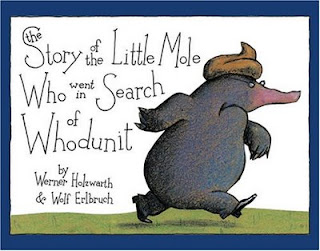