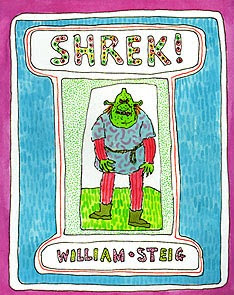 "His mother was ugly and his father was ugly, but Shrek was uglier than the two of them put together."

This timeless opening line ranks right up there with "Call me Ishmael" and "It was the best of times, it was the worst of times..." on the short list of greatest first sentences of all time. And so was born the juggernaut that is the Shrek multimedia empire.

With Shrek The Third in theaters everywhere, I thought it'd be interesting to look back at the original Shrek story which was written by the incomparable William Steig. Before it was given the brilliant Pixar treatment and turned into a rollicking pop-culture adventure through fairytale land, Shrek! was a charming but quaint little story about an ugly ogre.

The original Shrek was one of the first truly successful anti-heroes of children's literature. Children delighted in the devilish Shrek as he takes a casually destructive stroll over traditional fairytale convention. What makes Steig's tale so appealing is that he resists the urge to provide us with a tidy moral and does not feel the need to redeem Shrek from his badness. We like Shrek precisely because he does bad things and in the process he makes the good guys look silly. (To quote the great Dark Helmet, "Evil will always triumph because good is dumb.")

The Disney/Pixar film takes this story and pumps it full of steroids... and then filters it through old issues of US Weekly and Rolling Stone. While the original Shrek! was appealing in its simplicity and irreverence, the Shrek movies are wildly successful because of they are complex and layered with a neverending supply of pop-culture references that appeal to adults as well as children. Comparing the two is like comparing a chili cheese dog with a Thanksgiving dinner. Or more accurately, it's like comparing Tecmo Super Bowl to Madden 2007 (for the record, I'd go with Tecmo Super Bowl 9 times out of 10).

Scorecard: Since the book and the movie are so vastly different, it can be hard to figure out where to lay your allegiance. Not that you have to--it's okay to like both. But in case you did want to make a comparison, here is a quick scorecard to get you started:

• In the book, there is a cameo appearance by talking donkey. In the movie, you have Eddie Murphy's purposefully and endlessly annoying jackass. (Book 1, Movie 0)

• In the book, Shrek breaths fire and shoots lasers from his eyes. In the movie, he has a Scottish accent. (Book 27, Movie -539)

• The first movie has the politically incorrect (and hilarious) "Do You Know the Muffin Man" torture scene. (Book 27, Movie 5)

That should be enough to get you started. Obviously, I haven't seen Shrek the Third yet (I'm apprehensive to say the least), but it could drastically alter the standings. However, the fact that Justin Timberlake has an actual role in this movie automatically knocks it back another 3,072 points.
at 9:41 AM

Remember that our essay writing service https://essaysrescue.com/payforessay-review/ helps everyone who’s willing to think outside of the box and walk the extra mile to achieve the desired academic result.