The Big Bad Wolf and Me 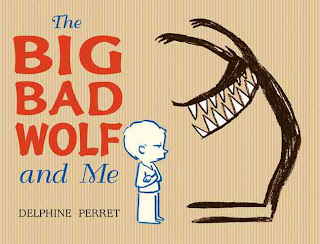 This is a charming tale about a big bad wolf who has lost his mojo. Perret's wolf is in the midst of an existential crisis because his life has lost meaning. What will he do now that he is a Big Bad Wolf that isn't so big or bad anymore?

Perret's tale is also the latest chapter in the continuing saga involving our favorite much-maligned wolf... Paul Wolfowitz. With his recent resignation, he is not only handing over his job, he is relinquishing the last of his mojo.

This was the man who used to strike fear in the hearts and minds of the world with the sharp and terrible teeth of his neo-conservative policies. This is the architect of the Iraq War! Now he just got bullied into resigning by a bunch of Europeans. Mojo meter: Running on Empty.

So what does a mojo-less wolf do? He goes into hiding. In Perret's story, it is up to a young boy to befriend the humiliated wolf, nurture him and help him regain his swagger. In Wolfowitz's case, the young boy will probably come in the form of some high powered D.C. lobbying firm or think tank. They will inevitably pay him embarrassing amounts of money and give him time to lick his wounds and recover from his latest political defeat.

Perret's Big Bad Wolf does eventually get his swagger back... the question is, will Wolfowitz? And if he does resurface, what new and terrible tricks will he have learned? Who will be his first victim? And will he still have those Howdy Doody ears?

Note: This latest scandal brought a critical issue to the forefront. I'm not talking about the need to clamp down on corruption within international politics, or even the declining credibility of the United States on the world stage... the key issue here is that we, as a society, really need to come up with better words than boyfriend and girlfriend. I mean, we're talking about grown men and women here... over the hill people who are (hopefully) engaged in a mature (and in this case, lucrative) relationship... doesn't boyfriend and girlfriend sound a little immature and trite? It is especially unfortunate for Ms. Riza, who is constantly referred to in the press as "Wolfowitz's girlfriend". This is unfortunate on two levels:

1) The term "Wolfowitz's girlfriend" undermines any of her professional achievements by labeling her purely based on her personal relationship with Wolfowitz. Defining her, not by her own merits, but by her relationship to her male partner is not only an affront to feminist ideology, but sounds more appropriate for the junior high school yard.

2) The term "Wolfowitz's girlfriend" implies that she was dating a loser.

So my challenge to you is to come up with better terminology for boyfriend and girlfriend. Any suggestions?
at 9:51 AM

Email ThisBlogThis!Share to TwitterShare to FacebookShare to Pinterest
Labels: Aalphabetical: B, Little Myth Sunshine, Political ParTAY, Wild Animal Kingdom, With Friends Like These...

lately, i've been enjoying using the term "lady friend" (and its counterpart, "man friend") to describe people who are not quite yet at the boyfriend/girlfriend stage, but not just dating each other. it can also connote canoodling and be juuust vague enough that you can be hooking up, making out, and/or knocking boots without having to really define or commit to anything. so it's nicely (and probably frustratingly at some point) all-encompassing! what do you think of that?

very nice, but i was thinking more of a grown-up term for full on "boyfriend-girlfriend" status. People who have already committed to a relationship, but have also graduated from junior high.

how about... "automatic shot-gun dibs in the car mate"?

is "life partner" too much commitment? too bay-area? what about "boo"? that might be for those who have graduated for junior high school and are now in high school. though that might also be too 2005. "significant other"? that one seems to be gaining momentum. enough that it's now referred to as "S.O." in some circles. what say yoU?

I was considering "life partner", but I think that has been coopted... it's hard to say "my partner" without people assuming it's a same-sex partner. Not that there's anything wrong with that, but it's already too loaded.

but I like "boo"... but since it is a little outdated, maybe we could go with "tada!"

"I'm taking my Tada! out for dinner and drinks on the town."

"My Tada! just punched me in the ear because i forgot to do my dishes... again."

eureka, i think you have hit upon solid gold! i'm currently looking for the Tada! of my dreams.