The Unnecessary Children's Book Sequels That Never Were Contest had a whole bunch of fun submissions that played on Shel Silverstein's The Giving Tree, so it had to make it as an honorable mention: 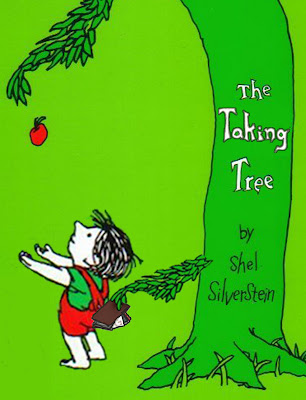 The Taking Tree: Shel Silverstein's sequel to The Giving Tree proves to be much less popular, as children everywhere shun trees for fear of grabby branches and thieving twigs, and parents complain about the bad morals being conveyed to their impressionable tots. Book rated highly with test audiences, but it was later revealed that test audience consisted mainly of rhododendrons. -a.fortis, Finding Wonderland

The Tree: Co-dependent No More!: A burst of insight leads the formerly Giving Tree to shed its unhealthy relationship with The Boy as it sprouts a new branch from the stump it has become. -MotherReader

The Irate Stump: The Giving Tree has a few regrets . . . -Jamie Michalak

The Trading Tree: The story of a cunning tree which, starting with the offer of an apple for allowance, slowly trades a young boy out of his considerable inheritance over the course of his life, leaving him with nothing but a place to sit. -Tony Dowler (not an official entry, since he's a relation...)

And one more for good measure--the unnecessary sequel to Bread and Jam For Frances:

Brie and Foie Gras For Frances: After spending a month-long summer vacation in Paris with her parents and younger sister, Frances returns home and refuses to eat anything other than brie cheese and foie gras imported from France. -Elaine Magliaro 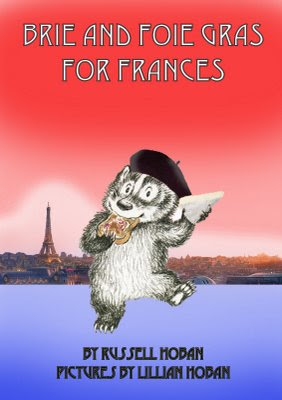 That's it for now. Remember to check in with Saints and Spinners on Friday to see who got first place in the contest!

p.s. there are a ton of other honorable mention worthy submissions that I hope to get too in time... unfortunately, if I spend any more time on photoshop my eyes might pop out of my skull and/or my wife might stuff my laptop down the garbage disposal (with good reason).
at 1:35 AM

I LOVE these -- however, don't make your wife trash your computer so early in the marriage on our account!!

I've been enjoying these so much - and am glad to have squeaked in the honorable mention category. Next year I'll turn my brain on high power and win this thing. I mean, there will be a next year, right?

Oh, MotherReader, you're giving me ideas...

Hiya! I know this is kinda off topic but I'd figured I'd ask. Would you be interested in trading links or maybe guest authoring a blog article or vice-versa? My site addresses a lot of the same topics as yours and I think we could greatly benefit from each other. If you're interested feel free to send me an e-mail. I look forward to hearing from you! Excellent blog by the way! psychotherapy singapore

I have been surfing online more than three hours today, yet I never found any interesting article like yours. It’s pretty worth enough for me. Personally, if all webmasters and bloggers made good content as you did, the web will be much more useful than ever before. bunions

I realize this is off-topic, but I felt I'd ask. Would you be interested in exchanging links or guest authoring a blog post for us, or vice versa? My blog covers many of the same issues as yours, and I believe we could significantly benefit from working together. If you're interested, please contact me via email. I eagerly await your response! By the way, your blog is fantastic English dissertation writers

When you mention honorable things you will very well know how to wear the jackets like bomber leather jackets are the sign of impression. This guide to knowing that you will wear the jackets.