An alien comes back from an anthropological research trip to report its findings to an audience of alien colleagues. The presentation takes place in Auditorium B5, otherwise known as Mystery Science Theater 3000. Unfortunately, the report "How Humans Make Friends" hardly qualifies as academically rigorous, as it is based mostly on anecdotal evidence. Nowhere in the study does the alien researcher mention some basic attributes of solid research such as valid sample sizes or accounting for construct irrelevant variance, and there isn't even the slightest hint of any attempt to gather longitudinal data.

Nevertheless, the report does shed some light on the bizarre behavioral patterns of human beings. And one can hardly blame the alien for its low academic standards. It was only visiting our planet for a short while. Even humans who study humans for their entire lives are unable to come up with much in the way of groundbreaking revelations.

Just yesterday, newspapers all over the country were reporting on two University of Texas professors who released a report detailing the motivations behind sexual activity.

From the Washington Post: "College-aged men and women agree on their top reasons for having sex: they were attracted to the person, they wanted to experience physical pleasure and "it feels good," according to a peer-reviewed study in the August edition of Archives of Sexual Behavior."

(Disclaimer: The Archives of Sexual Behavior is housed in the Library of Shit We Already Knew.) 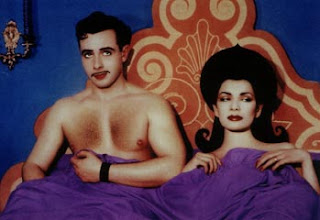 So college kids are having sex because "it feels good." Thank you Academia for clearing that up for us. Having blown the lid off of this whopper, Dr. David Buss and Dr. Cindy Meston will next unravel more of mankind's most persistent mysteries with three papers to be released in the upcoming months:

-People Eat Chocolate Because It Tastes Good: A Scientific Examination of the Yumminess Factor

-Puppies Are Cute: A Control Group Study Outside of Starbucks

Now, he doesn't look like the kind of guy who would design a research project as an excuse to talk to nubile undergraduates and ask them detailed questions about their sex lives, does he?

Hey baby, why don't we go back to my place and finish this survey over a glass of chardonnay and some Baudelaire?

I'm glad to see the Satellite of Love is getting some use after Mike's departure.

I recently paid a little visit to the Library of Shit We Already Knew to see all those recent groundbreaking reports that Fast Food Makes You Fat. Couldn't quite get my mind around that - had to see the data for myself.

In the Library of Shit We Should Have Already Known But Didn't, author John Gottman has The Seven Principles For Making Marriage Work: the top factor that makes or breaks a relationship is not communication, sex, taste in books and music, etc. but compatibility. This should be an obvious conclusion, but it isn't. (The good news, then, is that you don't have to be totally well-adjusted in order to have a good relationship if you're actually compatible with that person.)

I confess, I didn't read much beyond the first chapter. I probably should. Be that as it may...

How Humans Make Friends sounds like something in the realm of Dr. Xargle.

Unfortunately, I didn't have time to wrap my mind around the "Fast Food Makes You Fat" report because I was too busy wrapping my lips around a delicious McGriddle.

And can i quote you as saying "you don't have to be totally well-adjusted in order to have a good relationship"? I might need to keep that one in my backpocket for safekeeping--you never know when it might come in handy.

Did you add that photo of the couple in bed? And is that guy's chest hair airbrushed on?

it's either airbrushed on, or dude has a very strange post-coital glow.

Sure, you can quote me! However, people might retort, "Yeah, but consider the source."