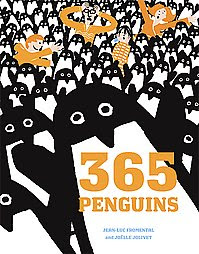 On January 1st, a mysterious package arrives in the mail. There is a penguin in it. Every morning for the rest of the year, another package arrives until the house is overrun by the bizarre flightless birds. Fromental skillfully mixes mathematical lessons into the narrative without sacrificing the playfulness of the story (he even throws in a message about environmental stewardship without sounding too preachy). All this while the poor family tries to figure out what to do with the overwhelming penguin invasion.

All ends well when their neighbor, Morgan Freeman, comes to the rescue. Using the soothing power of his gravel and honey voice, Freeman narrates the penguins out of the house and into cinematic immortality as the stars of March of the Penguins. Following the surprising success of this film, Freeman begins to train his newfound penguin army in preparation to overthrow the majestic baritone of James Earl Jones, his chief rival in the field of narration. If the penguin brigade is able to execute what they hope will be a bloodless coup, Freeman plans to rule the world of documentary film with an iron fist of eloquence and grace. Unfortunately, unbeknownst to Freeman, Jones has amassed his own private military force, comprised mostly of Star Wars fanatics dressed as Storm Troopers. Eventually, the two sides will meet on the battlefield in what will be widely known as The Voiceover Wars.

Note: The documentary The Voiceover Wars will be narrated by Al Gore and his mesmerizing monotone. It will not win an Academy Award and will effectively end Gore's wild Hollywood ride.

Note on Note: Ironically, the documentary Gore's Wild Hollywood Ride (directed by Ken Burns) will be narrated by Morgan Freeman and will win an Academy Award.
at 1:12 AM

But for real - did you not think the whole "I'm going to get around international law and introduce an invasive non-indigenous species to two new continents" idea was a little morally shaky?

Even with the addition of Morgan Freeman's (a.k.a. God) narration/leadership?

Interesting point. I never really thought about the possible environmental backlash... that could set a really bad precedent.

But, if we do have to be overrun by an uncontrollable non-indigenous animal species, I'm glad that it's penguins (real penguins... not obnoxious showtune singing computer animated penguins). Plus, they're already so well dressed, they could waddle right in and take over Congress tomorrow. And honestly, could they really do that much worse?

You can certainly see your skills in the work you write. The world hopes for even more passionate writers like you who aren't afraid to say how they believe. Always follow your heart.website development