David is a little rascal who just can't seem to stay out of trouble. Not only can he not stay out of trouble, but he appears to be possessed by the devil himself. Rather than pay for an expensive exorcism, the beleaguered mother can only muster a few frustrated "NO!"s as her son blazes a swath of devastation through the home.

As any parent knows, simply yelling NO! is not going to do the trick. Effective discipline requires patience, consistency... and a little bit of creativity. To get the ball rolling, perhaps David's mother should take some cues from the Thai police force. In a much publicized move, last week the police in Bangkok announced that any police officer violating department rules will be forced to wear a Hello Kitty armband. 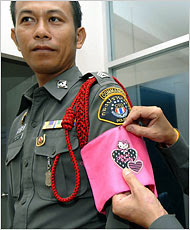 From the NY Times: “This new twist is expected to make them feel guilt and shame and prevent them from repeating the offense, no matter how minor,” he said. “Kitty is a cute icon for young girls. It’s not something macho police officers want covering their biceps.”


While there are some grumblings about this policy perpetuating archaic gender stereotypes, there has been a noticeable decline in officer misconduct. So for now, the controversial new policy will stand. Hello Kitty, Goodbye Bad Behavior.

In fact, the policy has proven to be so effective that variations are being adopted by a number of countries and has even made it's way into a few local precincts here in the United States. 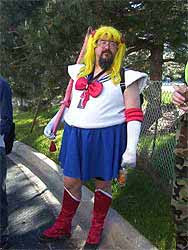 Left: Second Lieutenant Ignatius J. Reilly of the San Bernardino Police Department after he failed to submit his timesheet by the 5pm deadline.


Okay, so maybe this wouldn't be the best method of disciplining children. The point is, parenting in the 21st century is going to take some unconventional thinking. Blunt negative reinforcement is soo 20th century. If you want to turn your children into sparkling examples of good behavior, start thinking outside the box! 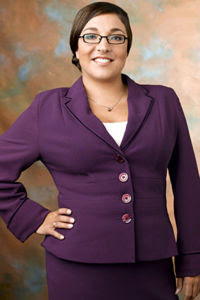 Though, if you have to think inside the box, do so literally. Go turn on that magic box in your living room, watch Supernanny, and let her prime time disciplinary techniques wash over you. There's nothing like tough love and a no nonsense British accent to tame unruly children. She's like a modern day Mary Poppins... if Mary Poppins were reincarnated as an eggplant. (She's good with kids and a great source of potassium!)

Oooohhhhhhh, I hope you're making that San Bernardino thing up. I would be ever so scared to drive through that city EVER again. Like it's not scary enough already.

What's wrong with eggplant? I have a suit just that color!

SuperNanny is great - another British Show which should come to the US is Tiny Tearaways
http://www.bbc.co.uk/bbcthree/programmes/tiny_tearaways/index.shtml

- No eggplant there! Enjoy!

Our online assignment writing service has a confidential policy in place to protect the sensitive data of customers. Information such argumentative essay topics 2021 as bank and login details are safe since our site has end-to-end encryption technology that prevents online risks. Also, we restrict staff from sharing data with third parties and unauthorized personnel from any access.