Was it a Yellow Hat?

I knew it was only a matter of time before he slipped. From Wednesdays headlines:

A passenger who originally departed from Lima, Peru, and connected in Fort Lauderdale had been hiding the small monkey in his ponytail, under his hat, according to Spirit Airlines spokeswoman Alison Russell.

During the flight, the monkey crawled out of its hiding spot, forcing the owner to hold it in his hands, where the unexpected visitor was soon spotted by fellow passengers and crew members, Russell said. 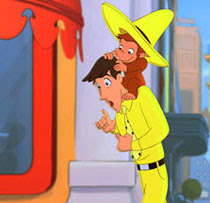 Left: An unofficial police sketch of the incident. The authorities have yet to confirm that the man's hat was indeed yellow.


The Port Authority Police Department was contacted by Spirit Airlines, and officials met the owner and the monkey at the gate. Port Authority spokesman Pasquale DiFulco released a statement saying the monkey was never loose in the airport, as originally reported.

"We've contacted health officials, and man and monkey will be turned over to appropriate officials. He was never on the loose in the airport," DiFulco said.

Editor's Note: Authorities refused to comment about the identity of the detainee. Some eyewitnesses claim that the man did have a yellow hat, leading many to speculate that the man in custody is in fact the infamous Man with the Yellow Hat who is wanted for the kidnapping of George the monkey and has been at-large for decades. We can only hope that the police have the right man and that he has finally been brought to justice.
at 9:25 AM

Email ThisBlogThis!Share to TwitterShare to FacebookShare to Pinterest
Labels: Aalphabetical: C, In the News, Miscellaneous

Ooh, I hope they put him away for good.

Now they need to turn their attentions to the evil poachers who killed Babar's mom.

...and then to those out-of-season hunters who offed Bambi's mother...

We should start compiling a Kid's Lit Most Wanted List... and then turn it into a melodramatic TV show on Fox. Then and only then will these criminals finally be brought to justice.