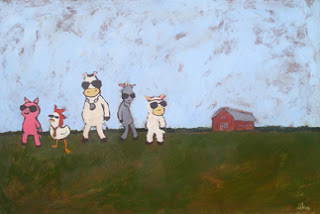 This is a reprint of a post on Punk Farm from back in April. What you are about to read is based on the reports of a former Bottom Shelf employee who claimed to be from the future... and therefore supposedly knew everything that was going to happen to the popular new band. We have since learned that this employee was actually not from the future... I won't go into details, but let's just say he sniffed a little too much rubber cement in Kindergarten.

In order to rectify the situation, we have spoken to Punk Farm's publicist, Jarrett Krosoczka, and he has graciously granted us access to the band members themselves. So on Monday, we will be posting an excerpt from an actual interview with the members of Punk Farm.

The Bottom Shelf's Ombudsman thought it would be prudent to reprint the old article before we set the record straight on Monday. We won't go so far as to call this a retraction, because what follows could very well turn out to be true. As we all know, raving madmen who claim to be from the future often to turn out to be correct (for an example see the documentary, 12 Monkeys).

So be sure to check in on Monday for an exclusive backstage interview with Punk Farm!

This is the story about the humble origins and early days of the legendary band, Punk Farm. Practicing in secret, Sheep, Cow, Goat, Chicken, and Pig wait until the farmer goes to bed to hold their barn-burnin' concerts. They rock. Their first underground hit is a punk rendition of Old MacDonald Had a Farm. It rocks. EE-I-EE-I-OOOOOOOO!!!

Krosoczka's chronicle ends just as Punk Farm is on the cusp of hitting it big. What follows is the stuff of rock legend. Their debut album, the eponymously titled Punk Farm, was an underground sensation. Seemingly overnight, Punk Farm was shooting up the charts. It was hailed as the first truly revolutionary album of the century by SPIN magazine and they were the darlings of self-important rock critics everywhere.

Unfortunately, as with most upstart bands, their meteoric rise began to corrode the original spirit of the band. The beauty of Punk Farm's music was its primal nature. Punk Farm mattered because they spoke to a nation of disillusioned souls and gave a voice to their anxieties. Each angry guitar chord screamed out against barnyard oppression. The relentless drums underscored the desperate futility of life on the farm. Punk Farm was simple, real... Punk Farm was important. Success changed all that. In a revealing interview with Rolling Stone, Sheep angrily claimed that Punk Farm "was being spoiled by the fattening embrace of success. We've lost touch with the raw emotion and spirit that made us great. Our music is being stifled by the uncontrollable arc of our suffocatingly decadent lives."

These words would prove prophetic. The rigors of life on the road and the pressures of producing a worthy follow-up album proved to be too much for the band to endure. Punk Farm split in the middle of recording their sophomore album: The Farmer in the Dell. Punk Farm was no more. As quickly as they had come, they were gone, leaving behind one album for the ages and legions of distraught fans.

Today, many hardcore followers (who staunchly insist that punk and popular success are antithetical) maintain that Punk Farm's demise was for the best because it ensured that they would never suffer the embarrassment of mainstreaming (a process that punk aficionados sneeringly refer to as Green Dayification).

10 years later, VH-1 Behind the Music released an episode charting the brief but iconic career of Punk Farm. The show, in its typically dramatic fashion, finally answered some burning questions about the band's legendary implosion. So, what really happened to the members of Punk Farm?

Pig: Tired of playing second fiddle to Sheep, Pig was the first to leave Punk Farm. Looking to break free from the stifling music world, Pig heads to Hollywood and leverages his musical fame into a major role in the dystopian nightmare, Babe: Pig in the City. Unfortunately, this marked the highpoint of his acting career. Despite critical acclaim, his Hollywood life never quite gets off the ground. He was last seen starring opposite Louie Anderson in a made-for-TV movie called This Little Piggy.

Goat: After nearly choking on a Coke can at a raucous party, Goat suddenly gets religion--near death experiences will do that to you. He sees the sinful nature of his debaucherous lifestyle and leaves Punk Farm to join the moderately successful Christian Rock group, Away In a Manger.

Chicken: No one ever notices the keyboard player. This was the sad case with Chicken, who was always in the background. Concealed by the obscurity of her instrument, one day she just disappears. Poof! She was last seen crossing the road leading away from the farm, but no one knows where she went. After a few days, the band filed a missing persons report and the police come to investigate. Unfortunately, clues are hard to come by and no one can tell the authorities why Chicken crossed the road. Pig, the most confrontational member of the group (and always looking to stick it to the man), suggests that, "Maybe Chicken crossed the road to get to the other side. You ever think of that?" The police were not amused by this snarky remark and Pig had to spend the night in the pen. To this day, Chicken's fate remains shrouded in mystery and has become the point of much speculation by amateur detectives and conspiracy theorists alike.

Cow: Always the gentle soul of the group, Cow's sensitive nature never recovered from the disappointment of Punk Farm's downfall. She had a nervous breakdown and was put out to pasture on a quiet farm in Connecticut. She can still be found grazing absentmindedly in the countryside, staring blankly at the quaint New England landscape. But if you could listen to her heart, you would find that it still pulses with the irrepressible drumbeat of Punk Rock. Unlike the others, for Cow, it was always about the music.

Sheep: The temperamental and hypnotic front man for Punk Farm captured the nation's imagination with the raw power of his voice and his reckless disregard for life... however, as is so often the case, the brightest stars burn the fastest. After the demise of the band, Sheep went into a self-imposed seclusion to work on a collection of autobiographical poetry. 3 months later, he is found in a field in New Mexico, having OD'ed on grass. The punk community mourns this great loss and his book of poetry, Fleece as White as Snow, is posthumously published by HarperCollins. It makes the New York Times bestseller list. Rock On.
at 1:22 PM