An adorable little fox wants a friend, so he decides to go out and catch one. His mother quickly corrects him and tells him that you don't catch friends, you make friends.

The fox takes this literally and goes out and builds a friend out of an apple and some sticks. Unfortunately, his apple-headed friend is incredibly boring and doesn't play well with others. Soon a few other animals from the forest show up and they all decide to help the fox make a friend. By the end, in the process of making friends, they have inadvertently become friends. Awww... In lesser hands, this could have been extremely cheezy, but Relf's illustrations are so soul squeezingly adorable, that it works really well.

Relf's book also works because it is a rather astute commentary on the difficulty of forging friendships. Indeed, it is rare for people to directly say "Hey, let's be friends." The more common method is to engage in an activity through which social relations and friendships are built... just as Fox and his buddies build a relationship while working on a project together, most people today make friends through activities such as happy hours, book clubs, or sports.

Sports are a great way to make friends (especially for guys who are typically less comfortable with their emotions) because it allows for the development of camraderie and emotionally significant relationships through a socially acceptable venue. Strong friendships are developed on the playing field and emotional barriers are slowly broken down. (Where else do guys pat eachother on the butt without a second thought?) The sports world creates a useful context upon which friendships can be cultivated and eventually thrive off the field as well.

Sports is such a powerful unifying force that it can extend well beyond the realm of individual friendships and into the global politics. The most startling example is the Iraqi national soccer team, who recently beat Saudi Arabia to win the Asia Cup. This victory prompted throngs of Iraqi citizens to take to the streets in celebration. Shiites and Sunnis rejoiced together, chanting "One Iraq!" 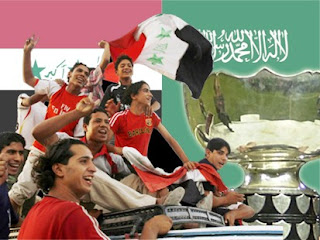 From Harper's: "Sport brings us together while the heads of everything in Baghdad can't bring us together for five years," said one reveler. "If the Iraqi football team ruled us, peace would spread in our home."


Indeed, it appears that where diplomacy and military occupation have failed, soccer has triumphed. Sport may prove to be the best hope yet for quelling the tragic sectarian violence that has been consuming Iraqi cities for years now.

Seizing this unprecented momentum, President Bush finally heeds the country's call for a change of strategy in Iraq and commissioned the conservative think tank, The Heritage Foundation, to produce the following top secret policy initiative: 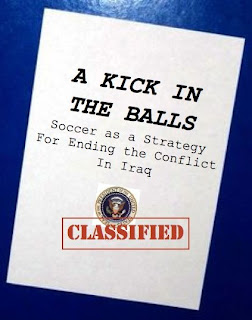 The report, called "A Kick in the Balls: Soccer as a Strategy For Ending the Conflict in Iraq" is an attempt to capitalize on the transcendent power of sport as a means of redeveloping a sense of national pride and peaceful coexistence between warring factions in Iraq. The report, which will be delivered to the President early next week includes the following recommendations: 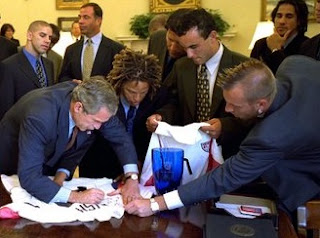 1) Replace the Department of Defense with the Major League Soccer All-Star team. 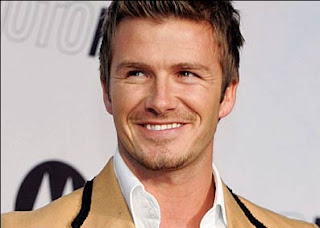 2) Cut off all ties with new British Prime Minister Gordon Brown and announce that all diplomatic relations with Great Britain will now go through David Beckham.

3) Preemptively commute the sentence of NBA official Tim Donaghy (who is under investigation for rigging games). Put him in charge of officiating for all future soccer matches to ensure that Iraq will always emerge victorious.


4) Pressure the international community to name Pele as the new Secretary General of the United Nations. 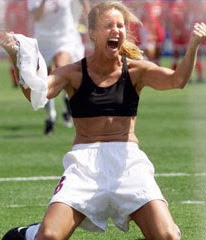 5) Appoint Brandi Chastain as the successor to Tony Snow for the position of White House Press Secretary. If anyone questions the president's latest strategy, she will be instructed to take off her top as a diversion. If that doesn't work, she will kick Helen Thomas in the face and shout, "Anybody else want some?!"


6) Request that French president Nicolas Sarkozy lend the services of soccer legend Zinedane Zidane to the Iraq War so that he can serve as a one man army to secure Anbar province.

Surprisingly, this drastic new strategy will garner support in both political parties. Democrats will support the initiative because shifting from a military based occupation to a soccer based occupation will allow them to bring our troops home sooner rather than later (and reverse their sinking standing in the public opinion polls).

Republicans and the White House will support the plan because no one in the United States really pays attention to soccer, so interest in Iraq will quickly evaporate. The less attention on the war, the better off the Republican Party. Soon (to the delight of the embattled Bush administration), CNN will stop covering it all together and the only place you will be able to get updates on the war will be ESPN Deportes.

Note: This strategy will not bring an immediate end to all violence. During this past week's celebration, 4 people were killed by celebratory gun fire (which tragically, is a low casualty rate in present-day Iraq). A key component to the success of this plan will be providing the Iraqi population with free bottles of celebratory champagne so that the worst injuries will be limited to the occasional cork to temple.
at 11:52 PM

Email ThisBlogThis!Share to TwitterShare to FacebookShare to Pinterest
Labels: Aalphabetical: F, Kids These Days, Political ParTAY, Wild Animal Kingdom, With Friends Like These...

Is it sad that I truly think this has more chance of succeeding than anything else the administration has tried so far?

And is there any chance we could get Ronaldinho involved? I know, he's Brazilian and they've stayed out of the conflict so far, but... he's very very cute. Could be good PR. Just sayin'.

Eisha, you're brilliant! I'll call the Heritage Foundation and see if they can add the following recommendation:

Recommendation 14b: Install Ronaldinho as the head of the new Iraqi Ministry of Magic. This move will a) take advantage of his cuteness and his ridiculous ball skills b) harness the enormous popularity of Harry Potter.

Would anyone stand a chance against the combined power of Harry Potter and Soccer?

And would Ronaldinho and his giant teeth be the greatest Quidditch player of all time?

It's a fine plan. Except for the part where you make fun of his teeth.

I'm not making fun of him... as a wise man once said, "Foreign Policy is worthless if it doesn't have teeth to it."

In which case, Ronaldinho may prove to be our greatest asset in the realm of international diplomacy.

i guess soccer is the solution to all of the world's big problems. remember paola? grassrootsoccer.org uses the power of soccer to fight HIV/AIDS!

Forget soccer (mustly because I don't understand the game).

I'd vote for Helen Thomas as prez!