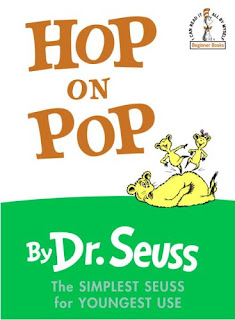 Upon closer inspection, Freud and other psychological influences can be found sprinkled throughout Seuss's work. The Cat in the Hat is nothing more than a hyperkinetic romp through the subconscious with the Id, Ego, and Superego. The entire plot of Green Eggs and Ham is driven by Freud's theories of the repression and sublimation of base impulses. (What else could "Sam I Am" be, other than an anal-retentive individual's guilt-ridden projection of the repressed self and its latent desires?) And Horton Hears a Who? Horton hears a psychiatrist diagnosing him with schizophrenia, that's who he hears. In fact, if you read too closely, Seussville runs the risk of becoming an inescapable labyrinth of Freudian slips and slides... so maybe we're better off reading with eyes wide shut.
at 9:04 AM

OK, I'm laughing hysterically, but can think of nothing to say. Maybe I'll just go curl up with my old copy of Hop on Pop.

Okay...this is too funny! Sorry I missed this post the first time around. Have you expounded yet on Freud and Robert Munsch's LOVE YOU FOREVER? I think Munsch takes the Oedipal complex way beyond Dr Seuss. Pop's not even mentioned in Munsch's book. I guess he felt Mom didn't need Pop once she had her baby boy!

"(What else could 'Sam I Am' be, other than an anal-retentive individual's guilt-ridden projection of the repressed self and its latent desires?)"

That may be the best sentence I've read in a blog EVER.

I've been away and so sad that it took me so long to read this post. Excuse me I need to re-examine Oh The Places You'll Go.