There is much buzz surrounding late night television because tonight, despite the ongoing Writers Guild of America strike, the talk show hosts are coming back on the air. The big deal is that they are going to improv the entire time... which means we'll get to see how naturally funny these guys are. 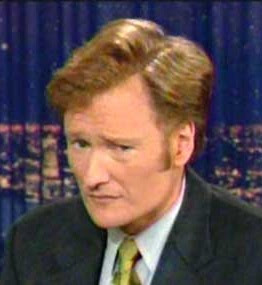 Note: Without any writers, I'm giving the early edge to Conan O'Brien because he has the funniest co-host: his hair.

Flying under the radar is the dramatic effect that the strike is having on picture books. With their writers out of commission, books all over the country are going back to work without any prepared text. They have also been forced to improvise... with predictably mixed results. Here are some of the more high profile books who are struggling without the writers.

"I do not like Green Eggs and Ham! I would not eat them with, ummm, well, I probably wouldn't eat them with a goat... unless of course the goat was a good friend and really wanted me to try it, then maybe I'd eat it, but just that once. I would definitely not eat them on a boat because I tend to get seasick and, umm... where was I? Oh, forget it, just give me the blasted plate and I'll eat them! Are you happy now?"

Cloudy with a Chance of Meatballs

"There was once a land called Chewandswallow where there was rain that rained but the rain wasn't normal rain, it was actually meatballs. The clouds were made out of meatballs too, as were the bushes and trees. The houses? They were made out of something else, not meatballs, but something different, like... meatloaf. Yeah, the houses were made of meatloaf. What a crazy town that was."

"Mr. and Mrs. Mallard were looking for a place to live.
Boston seemed like a nice place, so that's where they lived.
Next to a Dunkin' Donuts."

Guess How Much I Love You

Harold and the Purple Crayon

"As an act of solidarity with all of the writers, I am putting down my crayon until the writers' demands are met. Power to the people."

...I guess there was actually no difference on that one. Goodnight Moon is actually one of the few books that has actually benefited from the writers strike. But for the most part, the results haven't been pretty. Here's hoping that the writers and the industry bigwigs will come to some kind of reasonable settlement. We'll keep you posted.

I'm seeing "Guess How Much I Love You" in a whole new way now. Glad I don't have to read it to my kids anymore, because I think I'd go with the shorter version myself.

This is hysterical. Thanks for the excellent parody and a good laugh.

Much obliged to you for this https://www.onlineproofreadingservices.net/convenient-german-proofreading-online/ website is great and topical tips. keep it up!