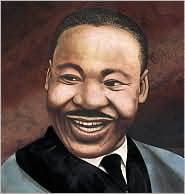 In honor of Dr. Martin Luther King Jr. and his big words, here is a powerful excerpt from his 1964 acceptance speech for the Nobel Peace Prize.

"I refuse to accept the view that mankind is so tragically bound to the starless midnight of racism and war that the bright daybreak of peace and brotherhood can never become a reality. I refuse to accept the cynical notion that nation after nation must spiral down a militaristic stairway into the hell of thermonuclear destruction. I believe that unarmed truth and unconditional love will have the final word in reality. This is why right temporarily defeated is stronger than evil triumphant. "
at 1:07 AM

I love him so much, in 3rd grade, I knew his "i have a dream" speech by heart.
i'm glad my favorite leader got a place on BSB :)

I hope you have that on tape... a tiny 3rd grader vietnamese girl giving the I Have A Dream speech? That would be an instant youtube sensation!