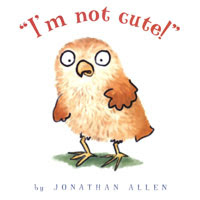 "I'm Not Cute" is a charmingly simple tale that also serves as a diagnosis of an unfortunate symptom of the life of a child television or movie star. As with many child stars, the baby owl struggles to convince the public that is not just a cute face. This is what is commonly known as the "I'm Note Cute!" Syndrome. There are several possible paths open to the baby owl. Below are the historically most likely scenarios.

Scenario 1: Never manage to break the suffocating mold of childhood fame and eventually disappear into the misty hills of obscurity.

Exhibit A: Jonathan Taylor Thomas
Sorry, Simba. The Circle of Life for a child star is painfully unforgiving.


Scenario 2: Burn out in a blaze of glory, never to fully recover.

Exhibit B: Corey Feldman
Last spotted on VH-1s The Surreal Life. It doesn't get any lower.

Scenario 3: Temporarily fade from the limelight only to reemerge and go on to have a successful career as an adult.

Exhibit C: Alyssa Milano
a.k.a. The boyhood crush that keeps on giving.

Scenario 4: Manage to survive the spectacular flame-out, and then (after years of rehab) rise from the ashes to reclaim stardom with a vengeance.

Exhibit D: Drew Barrymore
Went from snorting cocaine at 13 to Ambassador Against Hunger for the United Nations World Food Programme at 31. Not bad.

While Barrymore's recent nomination as U.N. Ambassador is impressive, she is not the first child star to succeed in the political realm. That distinction belongs to the mother of all child stars: Shirley Temple Black, who went from a life as an international childhood sensation to a distinguished career in international politics.

From the Good Ship Lollipop...

... to serving as the U.S. Ambassador to Czechoslovakia during the Velvet Revolution (which, by the way, was hands down the coolest name for a revolution ever).

As these stars prove, the "I'm Not Cute" Syndrome is not fatal... but it is life-threatening and can have crippling long term side effects if you're not careful. So if you hear "cha-ching!" every time you look at your adorable offspring, just take a minute and consider the tragic fate of the kids from Different Strokes... that should at least slow down the money train long enough for you to jump off before it's too late. 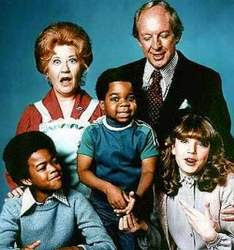 What are we talkin' bout, Willis? We're talking about the exploitation of children leading to irreparable psychological damage with sometimes tragic consequences, that's what we're talkin' bout.

Slate just featured an article about recently released Nixon documents. Within those documents, there was a memo revealing that our former president dealt with the opposite of the "I'm Not Cute" Syndrome. He struggled with what doctors refer to as the "I'm Not a Cold and Heartless Bastard" Syndrome. You can read the article and the original memo here, but here's a taste:

Nixon complained that "average voters" regarded RN as "an efficient, crafty, cold, machine." To help correct this common misconception, Nixon cited "warm items" (Page 3) such as "the calls that I make to people when they are sick, even though they no longer mean anything to anybody" (Page 4). "I called some mothers and wives of men that had been killed in Vietnam," he added, helpfully.

Because he was Nixon, he resented somewhat the social imperative that the president be courteous. "[W]e have gone far beyond any previous president … in breaking our backs to be nicey-nice to the Cabinet, staff and the Congress … around Christmastime," Nixon groused (Page 3). "I have treated them like dignified human beings and not like dirt under my feet" (Page 4), he continued.

Ahh... there's nothing like an efficiently calculating memorandum to your staffers to help convince the American public that you aren't efficient or calculating. Now, I just can't wait until three decades down the road when we finally get to see some of Vice President Dick Cheney's secret files (if they still exist).

Just think, given all the ridiculousness that's been coming out about the ultra-secretive Vice President's office lately... if that's the stuff we do get to see, just imagine what bizarre and delicious treats he's hiding from us in those unmarked drawers and file cabinets!

Word is that Comedy Central is already planning to bring John Stewart and Stephen Colbert out of retirement for just that occasion. The special will be called:

The Daily Show Reunion Special 2037
Inside Cheney's Drawers: The Dick We Never Knew

Though what would we call those who weren't cute as child stars, but grew up dreamy with a vengeance?

Hmmm... "weren't cute as child starts, but grew up dreamy with a vengeance?"

I think we're going to have to call that the Jerry O'Connell Phenomenon.

He's the only one I can think of... going from the chubby loser in Stand By Me to playing the Generic Studmuffin in every Lifetime Movie out there.

Note: I am not calling Jerry O'Connell dreaming or a studmuffin because of personal opinion, it's just that those are the roles he plays. I don't see him that way, he's just not my type.