So Few of Me

A kid named Leo is swamped by all the things he has to do and thinks "I wish there were two of me." Poof! Just like that, there are two of him! Naturally, it doesn't stop there and the clones begin to multiply. Surprisingly, Leo soon finds out that his workload hasn't gotten any smaller with his new help... instead, his list of things just keeps growing.

Given the mounting insanity of his workload, young Leo poses the zen-like question of "What if I did less--but did my best?" That's fine... but you'll never get into a top-notch college with that attitude, young man!

With the increasingly competitive (and insane) nature of college admissions, you would think that students these days would need clones just to keep their resumes up to snuff. When you look at some of these applicants, it seems impossible that one human being (let alone one teenager) could do all this without the help of a clone or two. For an example, check out this pretty typical sample resume: 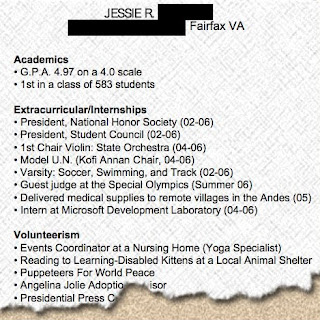 And we wonder why teenagers are so miserable! It would not surprise me if the most ambitious parents would attempt to harness the power of cloning technology in order to build the most luscious and eye-popping transcript for their children, something guaranteed to blow admissions officers out of their chairs.

Problem is, once a few people resort to cloning, everyone else is going to have to follow suit just to keep up. The whole admissions process will become more corrupt as applicants who must rely on their own abilities will be at a distinct disadvantage to those who can afford a small army of overachievers. Soon cloning will be as prevalent as SAT prep courses (Kaplan, with their finger on the pulse of the lucrative college admissions industry, will soon offer Clone Management courses to go with their standard slate of test prep classes).

Unfortunately, this would not stop with college. Because of the massive student debt that you are burdened with upon graduation, you will need your army of clones to work multiple jobs just to make your monthly payments. One poor soul will work in an investment banking firm, one will struggle as a freelance journalist, one will grow interesting facial hair and work for tips at the local a coffee shop... you get the idea.

Luckily, the odds of this cloning dystopia becoming a reality are slim because most of us are already familiar with the dangers of cloning. This is thanks in large part to the prescient warnings in the groundbreaking scientific treatise, Scientific Progress Goes "Boink" by the eminent scientist and philospher, Bill Watterson. How he didn't win a Nobel Prize for that invaluable contribution to humanity still blows my mind.
at 8:52 AM

Colleges want all sorts of evidence of "leadership abilities." I asked a teacher what these colleges were going to do with so many leaders and no followers. She said the colleges kept asking for "leaders" because they wanted their graduates to become wildly successful and contribute money to the institution as alumni.

speaking of alumni contributions, I find it absurd that they still send me letters asking for more money after all these years... especially when my student loans are still squeezing every last ounce out of my paycheck.

lol...your list of college graduates was hilarious. I have a friend that has funny facial hair working at a coffee shop....lol