Who's In The Bathroom? 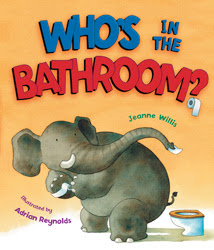 This otherwise playful book about pee-pee dances and the tortures of waiting in line for the bathroom took an unexpected shot up the charts of the NYT bestseller list last week. This is because an elephant caught in a compromising position while in the bathroom was suddenly front page news with last week's media storm surrounding the Senator Craig sting operation.

Most of you probably heard about the Republican Senator from Idaho, Larry Craig, who was caught in a Minneapolis airport restroom allegedly trying to initiate a sexual encounter. I'm not going to go into the details because there has been enough coverage over the whole affair already. Plus, what I found more interesting than the act itself is what the political reaction reveals about us as a country, especially heading into the election year.

Following the incident, the Republican Guard quickly came out in full force to denounce their former colleague. Craig instantly became a political pariah as everyone within his party tried to distance themselves from his public indiscretion. Compare this to Senator Paul Vitter from Florida who was caught in the phone records of the DC Madam a few months ago. He got a standing ovation.

I'm not saying Craig should have gotten a standing ovation for his bathroom misadventure, but this double standard and all the big talk that came out reinforced what has become a disturbing conventional wisdom: Homophobia is politically advantageous.

You'll have noticed this if you've listened to any of the Republican candidates on their respective soapboxes. Watching the Republicans debate is like watching a race down the bottomless pit of ignorance as they battle for position, desperate to prove that they are the "family values" candidate that opposes gay marriage the most. (Though, to be fair, the Democratic party isn't exactly blazing a trail of enlightened thought. Democratic candidates handle the issue of civil unions and gay marriage like hot potatoes filled with razor blades.)

Is it true that you have to be (or at least pretend to be) homophobic to be elected president of the United States? If so, what kind of a country are we, that we as a collective unit value and demand such intolerance?

Can anything be done?!

Maybe. Given that there have been a slew of homoerotic scandals within the Conservative movement as of late (including Rep. Mark Foley, Rev. Ted "It Was Just A Massage" Haggard, and this poor guy...) the Republican Party is hypersensitive at the moment.

This may just be the opening we've been waiting for, because many of those who are embroiled in the controversy have also been the most outspoken critics of gay rights. Larry Craig himself was a very vocal opponent of gay marriage. So... if politicians become afraid that spouting homophobic vitriol will arouse suspicion that they are actually gay themselves... then the best way to prove that they are not gay is to speak well of homosexuality. By reversing the rhetoric in DC, we could eventually affect policy changes and maybe even change the attitudes in the halls of Congress and beyond! Voila!

Okay, so it's not exactly the greatest plan... but desperate times call for desperate measures. It's either this, or we call Bravo and ask them to reunite the cast of Queer Eye For the Straight Guy for a special Making Over Congress episode. They probably wouldn't fix anything, but it'd still be worth it just to see the Carson Kressley go to town on Dennis Hastert's wardrobe. It may not be progress, but at least it'd be entertaining.

Note: When looking at the cover of Who's In The Bathroom?, try not to think about the implications of an elephant wiping using its trunk to wipe its butt. Let's just not go down that road... ever.

Like things are going to change among the fat cats in DC. It will be a long time before gay bashing is not safe. We need a few more of them to come out of the closet. In any event I'm glad it was an elephant, and not a donkey, in the toilet stall. Lucky you.