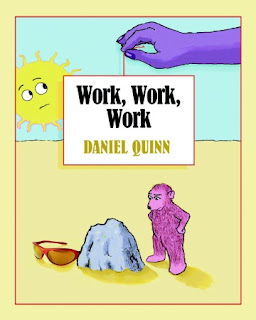 If this name sounds oddly familiar, yes, it is that Daniel Quinn. This is the author that became famous during the early 90's for producing a number of thought-provoking novels, the most famous of which is Ishmael. (Admittedly, I never got around to reading it, but a lot of my friends did. I think it has something to do with a giant gorilla that uses his telepathic powers to steer a nuclear submarine that chases a renegade CIA agent posing as a white whale. I could be wrong... but I'm not.)

Here Quinn makes a partially successful leap to the world of picture books. His narrative ability remains as sharp as ever. The message of Work, Work, Work is that sometimes you're so busy working that you miss out on life. Strong stuff and consistent with the themes of his other books. His illustrations though... could use a little work (no pun intended). Quinn's artistic style can best be described as resembling an eight year old using Microsoft Paint for the first time while eating Sour Patch Kids dipped in LSD.

If you think I'm being harsh, I dare you to check the book out for yourself and tell me I'm wrong. But be forewarned: DO NOT, under any circumstances, lick either of the rainbow spaceships on page 17.
at 8:59 AM