Igor: The Bird Who Couldn't Sing 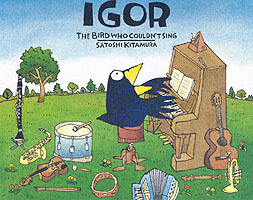 This is a story that will strike a chord with all those shower-only singers out there, those poor souls who have songs in their hearts and lumps in their throats. Simply put, Igor is a crappy singer that wants nothing more in the world than to sing. Unfortunately, wave after wave of negative reinforcement causes Igor to promise to never sing again.

But don't cry for him yet, Argentina! As luck would have it, the advent of reality television has created a niche market for someone of his, umm... unique talents. Unable to stifle the songbird within, Igor auditions for American Idol and, following in the legendary footsteps of William Hung, becomes a national sensation. He makes television history when his fabulously off-key rendition of Wake Me Up Before You Go-Go causes Simon Cowell's head to explode, unleashing a swarm of demons in tight black t-shirts that play tiddlywinks with the last shreds of Paula Abdul's sanity. Shortly thereafter, looking to capitalize on his fame, MTV signs Igor to host his own show called Crappaoke Central.

Sadly, his 15 minutes of fame eventually run out and the show is cancelled after only 2 episodes. He briefly resurfaces a few years later in VH-1's I Love the Aughts, but for the most part he becomes a footnote in the annals of pop culture history. Regardless, he did get to share his song with the world, and that was all he ever wanted. So follow Igor's inspiring example! Get out of that shower and share your song with the world! (But put some clothes on first. I said share your song... the rest of you should be kept to yourself.)
at 10:13 PM

Oh man, the illustration style on that cover is awesome.