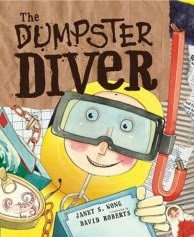 This is a really fun story about a quirky guy in a scuba suit and his miniature neighborhood friends who spend their free time burrowing through the neighborhood dumpster. They use what they find to create all kinds of interesting contraptions (think MacGuyver meets School of Rock starring Bill Nye the Science Guy).

This book really resonated with me as a person who:

1) wore a watchband made out of grocery store twisty ties for an entire year,
2) often fashions a make-shift belts out of string I find on the ground, and
3) once handed in a research paper made entirely out of bottle caps and already-chewed gum.

The illustrations do a good job of playing into the theme of reusing found items--for example, text is made to look as if it is written on duct tape. In fact, rumor has it that the illustrator himself was found in a dumpster. Not only that, but word on the street is that Roberts is really the alter-ego of the former superhero Ray Cycle, who used to do shows in CT elementary school assemblies, teaching us to "Re-re-re-re-re-recycle, Re-re-re-re-re-reuse it! Don't, don't, do not trash it! Don't, don't, don't abuse it!"

Can it be true? Has Ray Cycle really returned? Will he shave Al Gore and get him into shape so they can join forces in the fight against Global Warming? Or is it true that our withdrawal from the Kyoto Treaty in 2001 broke Ray Cycle's spirit once and for all?