Out of the Ballpark 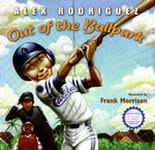 
A young Alex loves playing baseball but gets jittery and makes a mistake during a big playoff game. Despite his error, the team still makes it to the championship round. To avoid future mistakes, Alex practices obsessively every day. However, come game time, Alex makes another defensive gaffe. Redemption comes in the final inning when Alex hits the game winning home run, delivering a championship to his team. Alex's triumph teaches us the value of hardwork, determination, and the ability to persevere through hard times.


Anyone who follows baseball knows that this is a work of fiction, and Rodriguez admits as much. Yankee faithful can only hope that Rodriguez will find some inspiration in his own words and finally cast off the label of "least clutch player in the modern era." Non-Yankee fans could care less because Rodriguez already makes more money than most small countries and therefore deserves no sympathy.
at 5:55 PM