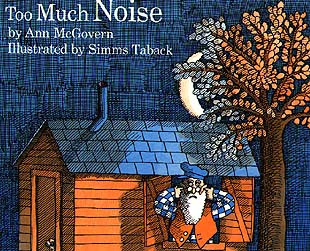 Peter thinks his house is too noisy, so he goes to the local wise man to complain. The wise man suggests that he get a cow. Predictably, the cow makes things even noisier. Peter continues to go back to the wise man, who continues to suggest that he get yet another animal. Soon Peter's house is filled with noisy beasts and is louder than ever.

Peter makes one final visit to this so-called wise man. This time, the wise man suggests that Peter get rid of all the animals. Peters does so and suddenly his house seems peaceful and quiet.

Aha! The wise man's tactic is revealed: Instead of decreasing the noise level, he recommended a temporary sonic escalation so that when the house is returned to its original noise level, it will seem quiet... and Peter will quit his whining and be content with the status quo.

Does this sound at all familiar?

It should, because the Bush administration employed the exact same strategy in an attempt to quiet a disgruntled Congress.

Last November, a newly elected Democratic Congress was clamoring for troop withdrawals in Iraq. How did the President respond? Instead of reducing troops, he called for a surge in troops. Wha?!

Then just last week, following the highly-anticipated testimony of General David Patraeus, Bush made an announcement to the county. He was finally going to begin withdrawing troops in Iraq. This would restore troop numbers to (you guessed it) pre-surge levels.

Tricky bastard! Not only that, but he was bold enough to add that "the way forward I have described tonight makes it possible for the first time in years, for people who have been on opposite sides of this difficult debate to come together."

Nice try, but it will take a lot more than this political sleight-of-hand to fool anyone. Congress saw right through this ploy. Senator Carl Levin immediately made a statement saying that "[President Bush's Plan] creates and provides an illusion of change in an effort to take the wind out of the sails of those of us who want to truly change course in Iraq."

Bush's Too Much Noise strategy isn't going to work because unlike him, we are not idiots. Also, Washington D.C. is gearing up for a presidential election. Which means Karl Rove will win Miss Teen USA before Bush gets members of Congress to stop talking.

If there's one lesson we can all take with us to the grave, it's that in our nation's capital there there will always be too Much NOISE!
at 9:00 AM

See, the next time someone scoffs at children's books as mere trifles (mmmm, trifle), I shall point them to your political review of Too Much Noise.

Yes, please send them my way... and I hope they like knuckle sandwiches and roundhouse kick pudding!

Something seems to have been way overlooked. Remove all the animals from the house and what do you have left? A whole lot of crap. Peaceful and quiet crap, maybe, but still a lot to shovel up. It's gonna take a whole lot of febreeze to mask this one.

I used to be more than happy to seek out this web-site.I wanted to thanks on your time for this wonderful learn!! I definitely having fun with each little bit of it and I have you bookmarked to take a look at new stuff you blog post. Smooth the Label

I'm really inspired along with your writing skills and also with the format for your weblog. Is that this a paid subject matter or did you customize it your self? Either way keep up the nice quality writing, it is rare to look a great blog like this one today..event agency in Singapore

We're a group of volunteers and starting a new scheme in our community. Your web site offered us with valuable information to work on. You have done a formidable job and our whole community will be grateful to you. top-notch content

We are a gaggle of volunteers and opening a brand new scheme in our community. Your site offered us with helpful info to paintings on. You've performed a formidable activity and our whole community shall be thankful to you. high-quality backlinks

You actually make it seem so easy with your presentation but I find this topic to be actually something that I think I would never understand. It seems too complicated and very broad for me. I'm looking forward for your next post, I’ll try to get the hang of it!how to seo