Piano Piano is an energetic story about a young boy (with an unhealthy addiction to hair gel) who is forced by his mother to practice piano so that he can grow up to be a grand pianist. Cali displays a quirky sense of humor and truly captures the emotional distress of being made to practice an instrument against your will. (As someone who once cried rather than practice Pachelbel's Canon, I can speak from experience.) It soon becomes obvious that the boy's mother is attempting to atone for her own childhood disappointments by forcing her son to succeed where she failed. Tsk, tsk.

Boundaries regarding parental control over their child has always been a difficult issue. In fact, it is at the heart of the debate surrounding one of the United States' most ignominious distinctions--according to UNICEF, there are only 2 countries that have not signed onto the Convention on the Rights of the Child: the United States and Somalia.

Somalia has not signed on because it does not have a recognized government. That's a decent excuse. This is not the case in the United States. Here in the good ol' U.S. of A. we recognize our government. We recognize it as a conglomeration of talking heads backed by the deep pockets of corporate interest and led by a condescending idiot... but we do recognize it.

It came as a surprise to me that one of the forces preventing the U.S. from ratifying this convention is a powerful opposition lobby that is afraid that the Convention will undermine the rights of the parents in the parent-child relationship.

Now, I haven't read the Convention thoroughly, so this may be oversimplifying things... but this is bulldoodoo. How is it possible that we are the only country of note who refuses to sign this? And is there really an anti-child rights lobby?! 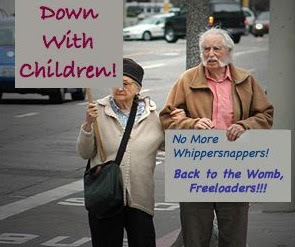 What we need is an outside voice of reason to straighten things out. In Piano Piano the wise grandfather steps in and acts as the calming force that leads the family towards a common sense resolution. Who can the United States turn to help it come to its senses?

Nelson Mandela and the Council of Elders, that's who!

I just read about this in the Washington Post the other day and have been giddy ever since. Nelson Mandela has been holding meetings on a remote, privately-owned island to form a group of retired global leaders who will be able to tackle world problems unfettered by the burden of national or international politics.

How freakin' cool is that? It sounds like something straight out of a comic book... like the Justice League on Metamucil. To make it even more like a comic book, the council is funded by an eccentric egomaniacal billionaire (Richard Branson). This leaves the door open for a plot twist where Branson turns out to be an evil genius who is using the Council of Elders as part of his twisted plan to take over the world.

"Can the Council of Elders foil Branson's evil plan before it's too late? Tune in next week when the Dalai Llama and the ghost of Mother Teresa attempt to rescue the Elders, who are being held hostage in Branson's secret island lair!"

Whatever happens, there is no denying that the world just seems cooler and more epic now that there is something called the Council of Elders in existence. Even if all they do is hang around playing shuffleboard and watching reruns of Matlock, it still sounds cool as hell.

Though, if they knew what was good for them, Matlock would already be on the Council... along with the Wonder Twins: Amma the Hugging Saint and the elder statesman of hip-hop, Chuck D.

Note from Mandela: If Flava Flav calls to ask about his seat on the council, tell him his invitation must have been, umm... lost in the mail. Sorry Foofy Foofy, there's just no room left... now go back to your love nest at Vh-1 headquarters, you silly silly peanut man.
at 9:00 AM

hi... i so enjoy your blog.
have you seen this book

hey lisa, i'm glad you're getting a kick out of the blog... and i haven't seen that book yet, i'll have to hunt it down next time i'm in a good bookstore.

Oh and congrats on your book release!