This is dePaola's classic story that revolves around an old woman and her wonderful pot. (No, it's not about Courtney Love). Strega Nona is the village medicine woman who has a magic pot that, when the right words are spoken, produces pasta. To stop the pot, she recites another spell... and blows three kisses.

One day, Strega Nona goes out of town and leaves Big Anthony in charge. Of course, he goes out and tells everyone about the magic pot and then casts the spell, unleashing the magical pasta producing power of the pot and curing everyone's case of the munchies. Big Anthony is the man of the hour!

Unfortunately, Big Anthony doesn't know how to properly shut down the pot and it begins to boil over. A dangerous wave of noodles threatens to bury the entire village. Now everyone hates Big Anthony. That's life in the public eye for you. One minute you're on top of the world, the next minute you're being chased by an angry mob and thrown into a jail cell with Lindsay Lohan.

In the mid 80's, a community theater in Woodstock, Vermont gained national attention for their politically charged interpretation of dePaola's story. Critics flocked to this tiny hippie hamlet to see the play, which had re-imagined the story as a parable about the prevalent economic policy of the times: Reaganomics. The play was called Streganomics. 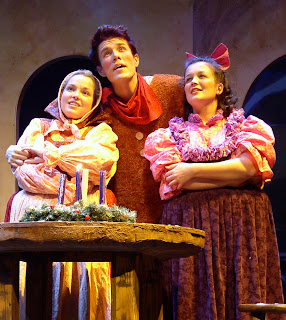 Left: A scene from Streganomics with Scott Robinski (middle) playing the Reagan-inspired character of Big Anthony, a generically handsome but bumbling doofus.


In the play, the director compares Big Anthony's short-sighted attempt to wield the power of the magic pot to the conservative party's unwaverying belief in the power of the free market. (In a particularly brutal pun, the directors replaced trickle-down economics with boil-over kitchenomics. There's a reason you've never heard of this play.)

Just as the pasta pot dangerously boils over, the U.S. economy eventually spins out of control. The economy takes on a life of its own and ushers in an era of unparrelled economic stratification. People always seem to overlook the fact that the market does not have a moral compass built in. Therefore, it should not be relied upon to magically set our social guidelines. The market must be regulated to some extent in order for it to reflect the morals of our society. (In this case, the three kisses represents the compassionate restraint imposed by socially-conscious regulatory policies.)

Just like Magic, Capitalism isn't inherently evil (as some zealots will tell you), but it's not inherently good either, and therefore its power must be wielded with wisdom and restraint... two qualities of which many politicians (on both sides of the aisle) are notoriously lacking.

In the book, Strega Nona returns to find the city under seige by pasta. She utters the magic words and blows the three kisses to bring the starchy surge to a halt. In the play, however, all does not end so well... Strega Nona doesn't come back.

The play casts Strega Nona as an exalted FDR figure, and her magic of containment is meant to represent the wisdom of the New Deal. However, just as the egalitarian principles behind the New Deal seem like a distant memory, Strega Nona's unique ability to put a lid on the magic pot is lost forever and it appears that the rising tide of pasta is irreversible.

Several people take the helm from Big Anthony, but no one has the courage to utter the magic words that might stem the tide... words such as, "progressive tax code," or "increased corporate regulation." The curtain drops with the citizens of the town buried under a sea of pasta and Big Anthony being airlifted by a private jet and flown off into the sunset.

Note: In the widely overlooked sequel, Strega Nona Meets Her Match, a mysterious stranger appears with a magic fondue pot. Lightning strikes and the two instantly fall head over heels in love. They join forces and with their two magical pots create an unending supply of Macaroni and Cheese, transforming their village into heaven on earth. Now THAT is what I call a happy ending.

Brilliant! Thanks for stopping by my blog, and thereby pointing a signpost to your blog.

Minh - Not only is this an excellent review, but it shows that, in a political sense, you're a true consensus builder. I think you might want to consider a run for office - or at least your own Fox News talk show.