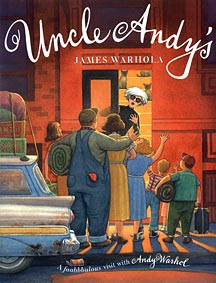 The story of Andy Warhol's down-to-earth country family is written by (and from the boyhood perspective of) Warhol's real-life nephew: James Warhola. (Andy dropped the "a" in his last name after graduating from college.) What at first appears to be a charming if somewhat pedestrian book becomes much more significant when considered in the broader context of modern art.

Part of Andy Warhol's genius lay in his ability to transform the mundane into an artistic statement. His most recognizable piece, the Campbell's Soup Can, took a common household item and elevated it to high art. Through Warhol's lens, the ordinary became extraordinary.

Ironically, in the process of revealing the artistry of daily humanity, Warhol dehumanizes himself. In the public sphere, Andy Warhol becomes an abstract concept, a wispy alien life form floating through the New York art scene, brilliant but not quite human.

With Uncle Andy's, James Warhola brings his uncle back to earth. His appealing book presents an Andy Warhol that we can relate to, which is an amazing achievement. Warhola manages to re-humanize his famous uncle, rescuing him from a bleak eternity of pop culture abstraction. In Uncle Andy's Warhol becomes what we never saw... a man with a family, a goofy uncle... a man who lived with his mother in a house full of cats.

It's questionable whether Andy Warhol would have appreciated his nephew's efforts to demystify his persona (the other-worldly public image may have been a carefully crafted artistic statement in itself). However, to some, the revelations in Uncle Andy's make Andy Warhol's work more significant--at the very least, it is an interesting chapter in pop culture history. While Andy Warhol brilliantly revealed the beauty inherent in the mundane, Warhola beautifully reveals the inherent humanity in the brilliant artist. Talk about avant garde!

Email ThisBlogThis!Share to TwitterShare to FacebookShare to Pinterest
Labels: Aalphabetical: U, Family Matters

Until I read your review on Uncle Andy's, I hadn't considered Warhol as the subject of an illustrated kid's book. I look forward to reading this one! Thank you.