In the News: Pig in Boots

Talk about a kid's book that writes itself: 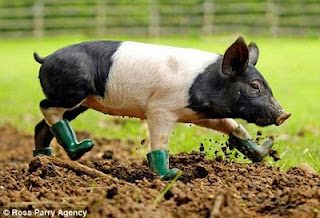 "An English piglet that was scared of mud has gotten over her fears, after being equipped with some miniature Wellington boots. Cinders, who lives on a farm in North Yorkshire, apparently suffers from mysophobia, a fear of dirt; she refused to join her siblings as they wallowed in the muck. Then owner Andrew Keeble's 12-year-old daughter, Ellie, suggested outfitting the pig with the tiny footwear, which had been adorning some key rings. 'Lo and behold, they fitted her like a glove,' said Ellie's father. Keeble, who runs a sausage company, said that Cinders would be spared the grinder. 'She's more of a pet really, now, and she's going to live a very long and happy life." (-from The Week)
at 9:17 PM

The professional web design by MediaOne would help you make a significant impact on the online realm. They would ensure that you make a strong online presence to increase you targeted audience. The unique design would help you gain more traffic.