Note: They obviously got the idea for the Wii Fit from me, but I am still waiting for my royalty checks from Nintendo to arrive in the mail... 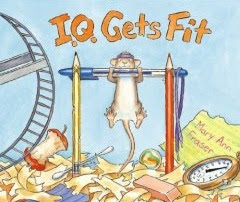 I.Q., the class pet, decides to join in on the school's Health Month. Determined to show how fit he can be, I.Q. develops an awesome fitness plan that makes Richard Simmons look like a pudgy hobbit in short shorts. (Oh wait...)

I.Q. is a great spokesperson for fitness and does an admirable job trying to stem the rising tide of childhood obesity. Unfortunately, inspiring though he may be, it is going to take more than a doggedly determined mouse to get today's kids to change their poor nutritional habits and increasingly sedentary lifestyles.

If we are truly committed to getting kids in shape, we’re going to have to think outside the box and adjust to the times. In fact, our greatest hope in the battle against childhood obesity comes from the last place you would expect: video games.

Video games are often considered one of the culprits responsible for our decrease in physical activity and deteriorating health. And it’s true, sitting around twiddling your thumbs while staring at a television screen isn't going to do much for your cardiovascular system. However, it is much too late to cut video games out of the equation. So what can we do? Simple. Harness the powerful appeal of the Nintendo and trick kids into being more active. Enter the Nintendo Wii.

The Wii is an innovative new game system that incorporates actual movement into the control system--instead of just pushing buttons, the game actually requires that you get up and move. This interface gets us off the couch, engages more muscles, and gives our poor worn-out thumbs a much-needed rest.

This is not the video game industry’s first attempt to merge with the physical realm. In the mid 90s, Nintendo introduced the Powerpad, but unfortunately it never really caught on… probably because it was really just a poorly conceived rip-off of Twister (without the crossover appeal of being a drunken party game for grown-ups).

Physical video games didn't truly break into the mainstream until the success of Dance Dance Revolution, a maniacally paced game that allowed nerds to turn their video game obsession into crowd-pleasing and sometimes awe-inspiring displays of goofiness. It also took a lot of jumping around, which was great for the cardiovascular system and your quads.

With the recently released Wii being one of the most sought after items on the market, it is only a matter of time before the video game industry is in a full blown arms race for physically challenging game systems… producing video games that are a viable form of exercise. And just like that, the extra pounds will come flying off and obesity will be a thing of the past. Problem solved.

As the technology advances, the games will become more and more lifelike. At which point, thirsty for the most realistic experience possible (and addicted to the endorphin high that comes with actual physical activity), gamers will have no choice but to unplug and go outside in order to experience the ultimate in wireless entertainment.

...unfortunately, it had been much too long since we'd all left our living rooms. Having been neglected for so long, reality has been hijacked! An all-powerful monarch named King Bowser is now ruling the planet with his vast army of Goombas patrolling the land. But there is still hope. Luckily, you've been training for this your whole life... and finally, it is time to kick ass and take names.
at 9:00 AM