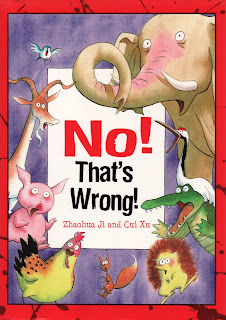 No! That's Wrong! is a lot of silly fun with wonderful illustrations... and a brilliant underlying message about the steady democratization of information.

Plot summary: A passing wind lifts a pair of underwear off a clothesline and sends them flying onto the head of a rabbit. The rabbit immediately thinks that this is a hat and goes off to share the fancy new accessory with his friends. The rabbit's friends all agree that it is a fabulous hat, but an invisible chorus keeps calling in from the borders of each page to correct the wayward bunny. (No! That's Wrong!) A vagabond donkey even comes up to correct the rabbit by showing him a men's underwear catalogue. The rabbit tries to conform to conventional wisdom, but in the end decides to rebel against the chorus and wear it as a hat... if he says it's a hat, then by golly, it's a hat! And a fabulous one at that!

The passing wind that serendipitously lifted that pair of underpants? That wasn't just some randomly mischievous breeze... those were the winds of change.

It is clear that Rabbit represents the current information revolution that is drastically altering the way in which we view the world. We live in a world where we no longer need to be confined by the definitions that are handed down to us from on high.

Look around you and you'll see the signs all over the place. The mainstream news media is being undermined by bloggers. CNN runs regular segments about the latest video on YouTube. The encyclopedia is being supplanted by Wikipedia. We no longer collect information, we create it.

All of which are signs that we no longer need to rely on the establishment for our information and that we are looking at the eventual demise of the traditional concept of authority. Case in point: The character of the donkey is an especially targeted attack on the waning reputation and crumbling prestige of Academia. 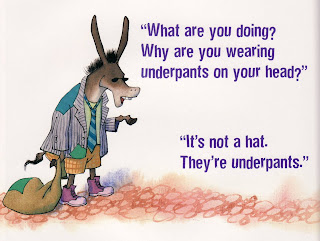 The donkey (or jackass) appears in thrift store suit like so many disheveled college professors in their ratty corduroy jackets. The donkey attempts to assert his authority on the matter of the underpants, but ultimately it is in vain. Academia, which for so long had the power of authority and an almost monopolistic claim over knowledge is slowly losing it's edge. The ivory tower has lost some of its sheen.

(Question: Is the fact that the donkey pulls out a men's underwear catalogue meant to represent the conservative accusation of the uber-liberalization of the academic elite and its alleged disregard for "traditional" family values?)

By refusing to kowtow to the naysayers of the establishment and tearing down the borders of the page, Rabbit is releasing himself and his compatriots from the arbitrary confines placed upon them by the power elite. As noted linguist Noam Chomsky wrote:

"Unfortunately, the act of 'definition' is the most widely accepted form of oppression in the world today. By assigning arbitrary 'meaning' to arbitrary words, restrictions are being placed on the very way in which we are allowed to think. Limiting our ability to think limits the ability to communicate, which in turn limits the ability to act as a group, which ultimately limits our ability revolt. It is precisely these types of deviously subliminal mechanisms that undergird all modes of oppression. Now, this is not to say that Merriam and Webster are the worst tyrants of our time, but they may just be the most effective." (Language and Mind, p. 137)

However, this form of oppression has been slowly eroding over time. Jumpstarted by the advent of the printing press and continuing through with the rise of the internet, the spread of information has exponentially gained in speed and in breadth. Information is now so readily available that the classic vestiges of authority have lost their stranglehold on knowledge and meaning--the consolidation of information is a relic of the past. The world is no longer exclusively defined top down, now it is being defined bottom up as well. And when bottoms are up, the only sensible thing to do is to wear underpants on your head. 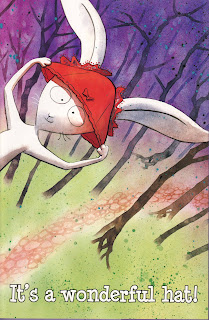 
Surprising Underpants on the Head News Update: Just when you thought Washington couldn't get any more ridiculous... during a Congressional hearing on possible violations of the Geneva Conventions regarding torture, Rep. Dana Rohrabacher (R-CA) hones in on the phrase "panties on someone's head" in an attempt to undermine the Inspector General's argument. Unfortunately, by distorting and making light of the situation, he only succeeds in demeaning himself and his office.

Though he's certainly not the first and he certainly won't be the last.

What a brilliant post!
This is really wonderful, thank you.