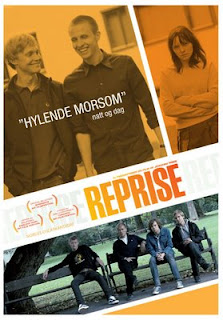 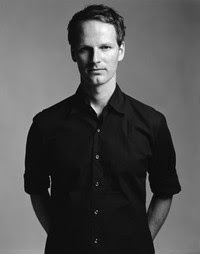 Don't ask us how we got our hands on this DVD Special Feature before the DVD even came out... just be glad for our ninja-like skills here at Bottom Shelf Books. So, without further ado, here is an excerpt from an interview with the director of the critically acclaimed Reprise with a surprising shout out to a beloved children's book classic.

Question: Where did you get your idea for this story?

Well, you see, the story is about two young boys who submit their novels for publication. We thought that this would speak to a lot of people because, pretty much everyone we know has a novel that they are working on. So it's not autobiographical in a literal sense, only in the sense that we all have that urge to reveal our creative side to the world, it is what I call a universal biography. As I tell my friends, it is The Unauthorized Biography of a Basic Human Condition.

That didn't sound too pretentious, did it?

And yes, the internet rumors are true.... the idea for this story did first come from the children's book The Monster at the End of this Book (starring lovable furry old Grover). I used to read this book all the time as a kid. I found it absolutely fascinating and it played a large role in shaping my artistic and narrative style.

For those of you who haven't had the pleasure of reading Monster, the book is about Grover who is terrified about finishing the book because there is a terrible monster waiting at the end of it. Every page he tries to deter the reading, trying to convince him or her not to turn the page, anything to get them to not finish the book.

I reread this in college and it really struck me on a personal level. As someone with his own aspirations as a novelist, I saw Grover as the manifestation of all those internal roadblocks that were preventing completion. He was the sharp toothed monster of self doubt, the nebulous beast named procrastination, the debilitatingly strong giant's grip of writer's block... and any other of the millions of reasons why most of us never finish that book that we're working on.

However, at the end of Monster, we realize that the monster waiting for us was Grover himself. The real monster was the self-doubt and fear that was causing us not to push towards the finish line. Phewf! 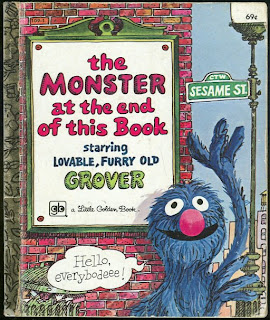 I even wrote about this phenomenon for my final paper in English 420: Critical Thinking and the Author. The paper was called, Nothing To Fear But Fear Itself: How the Grover Complex Undermines the Creative Process Before Conception.

I won't tell you what I got on the paper, but let's just say that, pretentious titles aside, there's a reason I'm making movies instead of writing.

So at the time, Grover represented the internal stuggle to realize one's creative potential. But then, as some of my friends began to finish their novels, I realized that I was wrong. There is something to fear at the end of the book. That finishing one's torturous first novel is not the cathartic experience that everyone thinks it will be.

Because once you finally do finish, you come to the sobering realization that you are not completely self-actualized, that you have not reached the mountaintop, but are standing at the edge of a gaping canyon that will swallow you whole if you are not careful. Failure, Success, Fame, Obsolescence, the Publishing World... indeed, there are many monsters at the end of your first book. And unfortunately, these monsters are neither lovable nor furry.

Did I mention that this movie is a comedy?