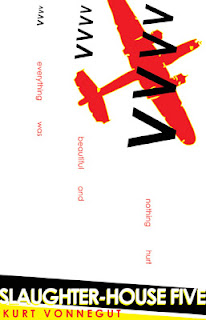 
"The formation flew backwards over a German city that was in flames. The bombers opened their bomb bay doors, exerted a miraculous magnetism which shrunk the fires, gathered them into cylindrical steel containers, and lifted the containers into the bellies of the planes. The containers were stored neatly in racks.

The nice thing is that this could potentially work for other Vonnegut works. For instance in The Sirens of Titan Constant would be rewarded for all of his hard work and heroism in the Martian war with a life of luxury on earth. Granted there are lots of other weird things that might not be good for kids, like abandoning your children and other misdeeds but on the whole i think it is a good long parable. I also think that kids would love Rumford and his dog as they are stuck in the infundibulum. Its a Dr Seuss word if i ever saw one.

There's a cool new book considered Jewish Jocks: An Unorthodox Hall of Fame that remembers 50[url=https://www.australianessay.com]Essay Writing Service[/url] expositions by as many top scholars for everybody from boxing cornerman Whitey Bimstein (a top pick of the extraordinary columnist A.J. Liebling) to sports wonder and handball wunderkind Jimmy Jacobs.