The True Story of the 3 Little Pigs! 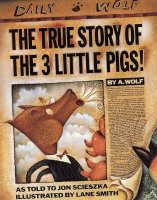 An exercise in revisionist history, The True Story presents the tale of the Three Little Pigs from the point of view of the "Big Bad" Wolf. It does an effective job of casting some suspicion on the traditional version of the story that we have all blindly accepted as gospel. Who is running the pig propoganda machine that has allowed them to have a monopoly on this particular fairy tale? And who in their right mind would build a house out of straw? (Unless there was a serious government subsidy thanks to the powerful Straw Lobby in Washington D.C.) Was this just another case of pork barrel politics gone out of control? Maybe if the McCain-Feingold campaign finance reform act had been passed sooner, this whole situation could have been avoided and we wouldn't have to deal with unecessary pig casualties. Then maybe the fate of A. Wolf wouldn't be left in the hands of activist judges and the court of public opinion.

Interesting Sidenote: Scieszka, seeing that there was a need to promote literacy among boys, started an organization called Guys Read, a web-based literacy program designed to "help boys find stuff they like to read." Worth checking out.
at 9:45 PM