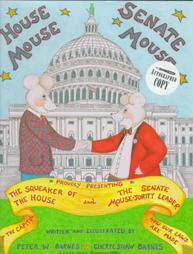 A watered down trip through the halls of an alternate universe Mouse Congress, this journey begins in an elementary classroom in Mousseouri (be prepared to be force-fed mouse puns). As a project, the class writes a letter to their Congressmouse (I warned you) saying that they think that the Congress should name a National Cheese. Obviously, this letter quickly finds itself in the very hands of the Squeaker of the House. (I'll understand if you stop reading now, no hard feelings.) After alerting his partner on the Senate side, they bring this issue to Congress and after some spirited debate, decide to name American Cheese as the country's official cheese. (Oh Say Can You Cheese! By the dawn's early... slice?)

Unfortunately, if this were a true story, the letter would arrive in the Congressmouse's office and read by a fresh-out-of-college Legislative Correspondent. If there were enough similar letters from constituents (fine, constitumice), only then would the issue would be brought to the attention of the house member. Even if it did manage to gain enough political traction, the entire congress would spend weeks quibbling over the wording of the proposal before eventually settling on a non-binding resolution in support of legislation to name the national cheese. At which the president would scoff and do what he wanted anyway... send more Mouseketeers into combat. (sigh.)
at 10:07 PM

LOL....i LOVE the puns! and stop getting so emotional over mouse interest and cage security.