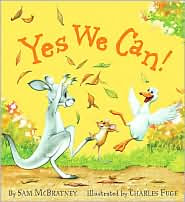 The cover of this book really does a good job of capturing the momentum that is building behind the Obama campaign. Here you see animals enthusiastically jumping in the air, which is appropriate because this election has drawn more interest and enthusiasm than any election in recent memory.

But note that the animals are not your standard elephant and donkey. No, here you have a kangaroo, a mouse, and a duck. In their diversity, they represent the vanguard of the movement towards a post-partisan political climate. We are more than just democrats and republicans, blue states and red states... I mean, a blue kangaroo? That's just silly.

Look a little closer and you will notice the leaves falling from the sky, indicating that we are indeed in a season of change, which has been one of the prime buzzwords of this election season. It is no wonder that Obama chose this book to be the foundation of his campaign message: Yes We Can.

Here is the Obama Yes We Can speech in New Hampshire, the one used for the will.i.am video. While the video is cool, I prefer the speech without the celebrities because, call me square, but I'd rather not have my vote swayed by the lead singer of the Pussy Cat Dolls.

Email ThisBlogThis!Share to TwitterShare to FacebookShare to Pinterest
Labels: Aalphabetical: Y, Political ParTAY, Wild Animal Kingdom, With Friends Like These...

Obama can unite the animal kingdom behind a common cause: saving ourselves from extinction.

We have more DNA in common than our politics suggests. There's no need to demonize other species.

Obama definitely has our support in November. We're spearheading comprehensive outreach efforts to all reptiles and amphibians.

When we hear Obama speak, we feel proud to be American.

Anyone but Huck. How are we to believe in a candidate that doesn't believe in us?

I just saw the video a few days ago and as soon as I saw the title of the book and the word Obama, I knew where you were going. Funny stuff.

Did you see the follow-up video, the McCain one: John. he. is.?

i did see the Mccain video... hilarious. that video alone will probably seal the election (knock on wood)!

Oh, I'm sure the people in power know what they're doing and that eventually they'll consider the little guy. Why rock the boat?

Look a little closer and you will notice the leaves falling from the sky, indicating that we are indeed in a season of change, which has been one of the prime buzzwords of this election season. It is no wonder that Obama chose this book to be the foundation of his campaign message: Yes We Can. bar necklace australia , bar necklace chile ,