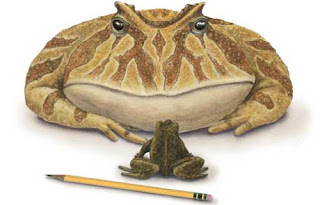 This flashback is in honor of the recently discovered Beezlebufo or Devil Toad, a prehistoric frog the size of a bowling ball which (according to Scientific American) may have eaten baby dinosaurs.

Note: Word on Capitol Hill is that Sen. Arlen Specter (R-PA) will be calling in the Beelzebufo to testify on possible use of human growth hormone... which is only slightly more ridiculous than Congress wasting taxpayer time and money on Roger Clemens and cheating in the NFL.

This is the first picture book for Breen, the Pulitzer Prize winning cartoonist. With the story of Stick, a headstrong young frog who likes to do things on his own, Breen displays an impressive sense of humor and comic timing. One day, when Stick shoots his tongue out to catch a dragonfly, he gets carried away (literally) and embarks on a wild airborne adventure. Through a series of surprising developments, Stick excitedly explores the wild world... but will he ever make it back home?

Stick is merely the latest in a long and celebrated line of frog explorers. Indeed, nature's first true explorers were the frog's distant ancesters, those intrepid souls who first ventured out of the primordial ooze: the early amphibians. Frogs are direct descendants of those brave few who left the comforts of their homes to explore the unknown lands above the surface of the water. It's almost as if wanderlust is genetically encoded in frog DNA.

Young Stick also owes much to the most persistent explorer in frog history... an adventurer whose exploits are so well-known that he is known simply as: Frogger. Before Frogger, the frog population had to be content with life around the dank world of the pond. But Frogger yearned for more, he want to stretch the boundaries of his world and boldly go where no frog had gone before.

While people still wonder why the chicken crossed the road, no one questions the Frogger's motives. Frogger did not set out to conquer the world, he set out to conquer himself. Despite frequent setbacks and increasingly dangerous traffic, he refused to quit until he crossed every street that he came across. His indomitable spirit would not be denied... he would either succeed or get flattened in the process.

Mr. Toad: Not content with life at Toad Hall, our hero follows Dante's lead and explores the depths of Hell. This harrowing journey is well documented in his memoirs: Mr. Toad's Wild Ride.

Kermit: Perhaps the most famous frog in history, Kermit was the ultimate explorer, blazing trails and opening doors at a prolific clip. He first burst onto the scene as the first frog in space ("One small hop for frogs, one giant leap for frogkind.").

Returning to a hero's welcome, Kermit leveraged his newfound fame into a legendary career in film and television. After conquering the entertainment world and winning every award possible, Kermit begins to feel that familiar itch to touch the void of the unknown... it was not in his nature to be content. So he set out to explore what he believed to be the frog's final frontier: Politics.

Stealing a page from the GOP playbook (which turned the celebrity of Reagan, Schwarzenegger, and possibly Fred Thompson into political gold), the Green Party convinces Kermit to make a run for the presidency. Kermit immediately accepts the challenge. In the first in a series of shrewd moves, Kermit selects his longtime advisor Fozzy Bear to be his running mate (Fozzy's down-to-earth charm and folksy humor polls extremely well down South).

Despite a spirited campaign, Kermit's bid for the highest office in the land eventually falls short (though, being a third party candidate in America, they never really stood much of a chance anyways). While he may have lost the election, Kermit once again wins our hearts when he ends his concession speech with a tearful rendition of "It's Not Easy Being Green."

Who knows, perhaps young Stick will go down in history as the next great frog explorer. But if so, it should be noted that he did not do it alone... he was standing on the shoulders of giants.
at 8:08 AM

I've heard word that the "devil frog" may well have been injected with AGH--Amphibian Growth Hormone.

And let us not forget Frog of Frog and Toad, an open-minded creature who crossed the species border and explored a close relationship with an amphibian "of another kind."

Thanks for reminding us all about some important characters featured in the Annals of Adventurous Amphibians.

this sets a terrible example for tadpoles everywhere. If we don't get this under control, then we will see a gradually mutating of the species until it evolves into the monstrosity that we know as Jabba the Hut.

the only benefit of which would be worth it to bring Princess Leia in the Gold Bikini, but is that really worth sacrificing the future of a species?