Live From the Bottom Shelf: On the Road With Punk Farm 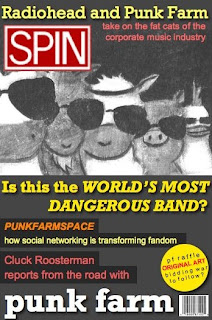 Is Punk Farm the World's Most Dangerous Band?
by Cluck Roosterman 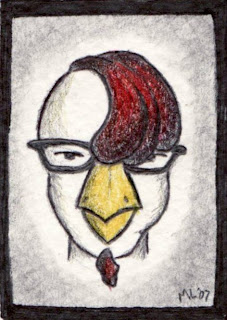 Cluck Roosterman here, reporting from the road with Punk Farm. I'm crammed into the back of the Rock Van, pecking away at my laptop. It's been a long strange trip. We started in Maine, zipped down I-91 to Miami, journeyed west to Texas and then finished the tour in Colorado. It's been a whirlwind to say the least. I don't want to go into detail, so I'll just say one thing about Sheep's driving: I'm glad I brought a large supply of Dramamine.

But I'm not here to tell you about life on the road. That was well chronicled in Punk Farm on Tour. My job as a reporter is to dig deeper and offer the broader cultural analysis that you don't hear at the water cooler or slop trough. So what don't you know about Punk Farm? How about this:

Punk Farm is the most dangerous band in the world.

This is not just overzealous reporter's hyperbole. It is a fact. Punk Farm strikes fear in the hearts of record executives everywhere. If you listen closely, you can hear them shaking in their designer Italian boots. Here's why.

A few months ago, the powerhouse band Radiohead made headlines by releasing their album, In Rainbows directly through their website, effectively cutting out all middle men (and/or middle women). They offered it essentially for free, allowing their fans to decide how much they wanted to pay (if at all). The gamble paid off and the band made a tidy profit off this revolutionary brand of optional capitalism. The press hailed it as a breakthrough in the struggle between artists and the exploitative music industry. The times, they are a'changin'.

However, Radiohead was not the first band to strike a blow against the corporate fat cats. Punk Farm had been releasing their music for free on their website for over a year now. Well before Radiohead shocked the mainstream media, Punk Farm rattled the nerves of record executives across the nation. It was such a shock to the music industry that legendary record mogul David Geffen released a cryptic memo in 2006 which simply read "Punk Farm must be stopped."

Last week I called up my good friend Naomi Klein, author of the anti-corporate No Logo and the anti-evil The Shock Doctrine. She told me that she considered Punk Farm to be "the first truly anti-corporate band in the world. Most bands claim to be revolutionary, but they are really just amped-up collections of false bravado and simplistically inflammatory lyrics. Every band at heart is slave to their sales numbers. By releasing their music for free, Punk Farm broke free from those shackles and haven't looked back. Without the burden of financial compensation, they are free to create art in its purest form. Because they are not beholden to 'the man' is why they are the only band that can truly 'stick it to the man'. 'The Man' in this case being the corporate music industry... and Farmer Joe."

I was intrigued by this, so on our way from Colorado back to the farm (a trip made in record time... again, a big shout out to the makers of Dramamine), I took a minute to ask the band about their status as the most dangerous band in the world. 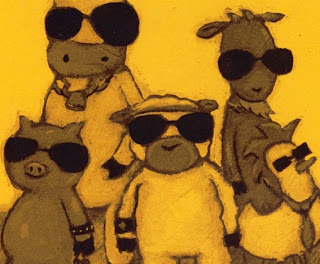 CR: Whose idea was it to release your music for free?

SHEEP: It was pretty much a mutual decision. I mean, we didn't really have any contacts at any record labels and we were picking up a decent Wi-Fi signal from one of our neighbors....so we just went with it.

COW: We wanted to get our music out there, you know? What is music worth if it doesn't have ears to listen to it?

CR: Did Radiohead contact you for advice before they released their album? Do you think Radiohead's new strategy has the potential to revolutionize the music industry?

GOAT: Thom Yorke and I are tight. We email. He wrote one day and was all, "Hey Goat, are you cool with us doing this?" And I was all like, "Whatever dude, whatever floats your boat." So Radiohead put their stuff out for free and got massive publicity for it.

CHICKEN: It might revolutionize the industry, but who knows? It sure is a nice thought, though. 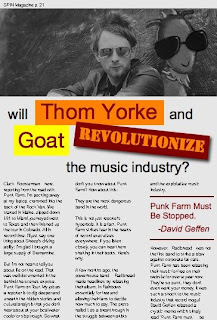 CR: Aren't you the least bit tempted to go corporate and cash in on your popularity? Just imagine what you could do with those millions of dollars...

PIG: There are millions of dollars in CD sales? Seriously? Man, maybe we should see about...

SHEEP: Pig, come on man. Don't be so naive. There are millions of dollars to be made, but for the corporate big wigs. Not us little livestock.

CR: Since the animals are the ones that do all the real work, does Farmer Joe share any of his agricultural profits with you?

PIG: No, all we get is some stacks of hay and feed. Not even good feed, how about something with some spice to it? A little kick, a little something!

CR: I hear that you are raffling off original artwork this week. What will the money be used for?

SHEEP: Yes, this is true. We sat for portraits by artist Jarrett Krosoczka. The money raised is going to go to two places. Most of the money will go to this non-profit group called the Central Massachusetts Arts Assembly. This is a group that is important to our man Scott Cambot, and he produced our latest tracks. Another part of the money will go to paying for the costs of recording the music and to the people who make our songs possible. People like Scott, Thom, and Erik who tune our instruments and stuff.

CR: Whose painting do you think will raise the most money? Doesn't this have the potential to create tension between you all? Is there any behind the scenes betting going on between the band to see who can drum up the most interest? 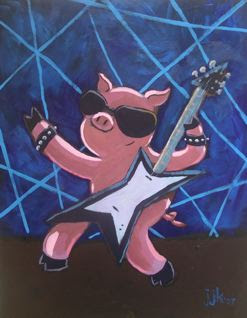 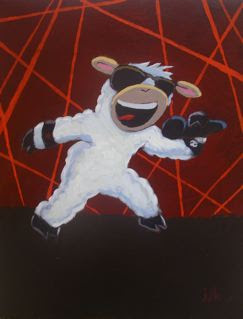 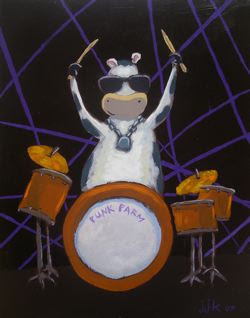 COW: I don't know, I wouldn't underestimate the popularity of Goat. 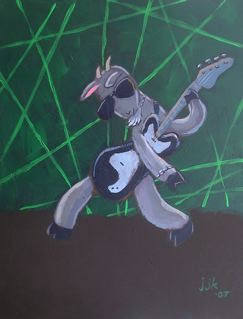 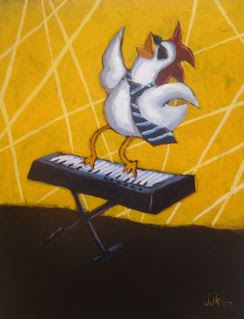 CHICKEN: People like chickens, don't they? I hope someone tries to win mine. Oh.....what if they don't? Oh....

PIG: I don't think it will cause any tension between us. Just as long as people understand that I will get the most tickets sold....

COW: Well, I don't plan on advocating, but if people would like to help boost my self-esteem...so be it!

CHICKEN: I'm not going to get any sleep all week....


To buy tickets for a chance to win one of these original band portraits (the ones pictured above), go to the Punk Farm Raffle website. And remember, rock memorabilia is a great investment. Clapton sold one of his guitars for $959,500 and he wasn't half the guitarist that Pig is. With the dollar being as weak as it is, this may be the last worthwhile investment opportunity of the decade.

As for who will raise the most money... based on my time with the band, the safe bet is for Pig to rake in the most cash, but I'm inclined to agree with Cow. My money is on Goat as the silent-but-deadly dark horse candidate.

Okay, that's it for now. If I don't stop typing now, I'm going to get sick all over the backseat of the Rock Van. For the rest of the Punk Farm Interview series, check out the BSB archives. And be sure to check back in on Wednesday for Part 2 in which I explore the social networking phenomenon known as punkfarmspace.

Until then: Rock on, Rock off, I don't care. As long as there is Rock involved.

Uh-oh, it's not a good sign when the band members are bickering...

Great idea for a raffle.

with any luck, any tension within the band will only provide fuel for their music.

goat is so dreamy