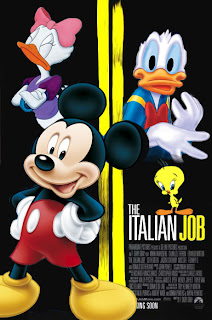 Wednesday morning, the world was shocked to hear that Mickey Mouse, Tweety Bird, Donald and Daisy Duck were summoned to a court in Italy to testify in regards to their involvement in an international counterfeiting scheme (for the full story, go here). The much beloved quartet had been operating with Italian aliases (Topolino, Titty, Paperino, and Paperina) and had been under surveillance by Italian Intelligence for months now.

In a statement released on Wednesday morning, the lawyer representing the Italian government said, "The epic failure of Euro-Disney was a devastating financial blow for all of us, but that is no excuse for resorting to a life of crime. No one has been found guilty yet, but the evidence is overwhelming. Rest assured, we will get to the bottom of this."

Even Italian president Giorgio Napolitano, weighed in on the controversy, saying that "This should makes us all wonder just how much of the 'Magic' Kingdom is actually magic, and how much is counterfeit. In 1982, our fellow European Jean Baudrillard wrote an essay called Disneyworld Company, in which he pointed out that Disney was 'the grand initiator of the imaginary as virtual reality.' Today, this seems quite prescient. At the time, I dismissed this as typical French philosophical foolishness. If I had known that all Baudrillard's talk about hyper-reality and simulacra was really about counterfeiting schemes and international crime syndicates, I wouldn't have written him off as just another namby-pamby fluffhead."

Needless to say, the news has sent shockwaves all over the world. We will keep you updated as the situation continues to develop.
at 10:15 PM

Email ThisBlogThis!Share to TwitterShare to FacebookShare to Pinterest
Labels: In the News, Miscellaneous, Wild Animal Kingdom

I always thought Donald's rashness and temper would get him in trouble. It is a shame he is bringing Mickey down with him, he always seemed like such a nice guy. Sure he had a high voice wore gloves everywhere and was slightly androgynous so correlations to several mentally unstable people can be made (Michael both Tyson and Jackson.) I too never quite understood if Minnie was his sister or what, but the fact remains Mickey seemed like a good guy and the fact that he will be dragged through this will only hurt him.

There is no way Donald was the mastermind here. If anything, he's the loose wire that Mickey unleashes on his enemies. It's obvious that it's either Mickey or Daisy who is the brains of this operation. Don't let their calm exteriors and innocent smiles fool you... and watch out for Daisy's eyelashes. They are deadly.

Perhaps. I think we can both agree that Tweety is behind the leak that got them busted.

Want to find out the net worth of your favorite entrepreneurs, athletes, actors, celebrities? See more in Celebrity net worth.