Why Write For Children? and a Reader Challenge! 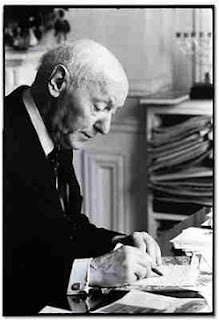 Here's some food for thought for any aspiring authors lurking about town. As I always say, there's nothing like a strong dose of Nobel-Prize winner to give you a much-needed kick in the pants.


This statement, originally prepared by Mr. Singer for the occasion of his acceptance of the National Book Award in 1970 for A Day of Pleasure: Stories of a Boy Growing Up in Warsaw, was read to the assembled guests at the Nobel Prize banquet at the City Hall in Stockholm on December 10, 1978.


Why I Write For Children

There are five hundred reasons why I began to write for children, but to save time I will mention only ten of them.

Number 1: Children read books, not reviews. They don't give a hoot about the critics.

Number 3: They don't read to free themselves of guilt, to quench their thirst for rebellion, or to get rid of alienation.

Number 4: They have no use for psychology.

Number 6: They don't try to understand Kafka or Finnegans Wake.

Number 7: They still believe in God, the family, angels, devils, witches, goblins, logic, clarity, punctuation, and other such obsolete stuff.

Number 8: They love interesting stories, not commentary, guides, or footnotes.

Number 9: When a book is boring, they yawn openly, without any shame or fear of authority.

Number 10: They don't expect their beloved writer to redeem humanity. Young as they are, they know that it is not in his power. Only the adults have such childish illusions.


Reader Challenge: Since Mr. Singer only gave us 10 of his 500 reasons, let's see if we can flesh out the list a bit. Vi got the ball rolling with number 11. I don't imagine we'll make it anywhere near 500, but let's see how far we can get. The gauntlet has been thrown down... who will pick it up and use it to slap me in the face?

(Note: This list was brought to my attention by a worldly and wise girlfriend and a rockin' used bookstore. Two of my favorite things in the world!)
at 8:56 AM

Number 11 (if I wrote for children): they don't equate good writing with super sophisticated words and obscure references. The simpler, the more beautiful.

Number 12: When children drool all over books, its because they like the way it tastes... not because there is a picture of Fabio on the cover.

Number 13: Because judging a children's book by its cover is more acceptable.

Number 14: A children's book with the title Men Are From Mars, Women Are From Venus might actually be fun to read.

Number 15: Because kids tend to hate spelling, so you don't have to double check for typos. Number 16: Because you don't have to sit for a ridiculous black and white sexy-nerd author photo. Just draw a picture of a chipmunk in a top hat, and that's good enough. Number 17: Because Reading Rainbow reviews are only rarely scathing, and they always end with a thumbs-up and an upbeat note. Da-dute-dute!

18) When you write for children, you don't have to use swear words to sound impressive. Words like "underpants," "poop" and "stinky" will simultaneously elicit laughter from children and shock from grownups.

What a great challenge, and I have always LOVED this manifesto of sorts from him. I first read it in grad school. It's perfection.

19) After reading a story that they enjoy, children will write their own.

20)Adults don't spend enough time throwing their books. Nothing is more satisfying than taking a book that you don't want to read and chucking it at the far wall.

Number 21: Even if your book isn't particularly funny, there's still a good chance that your reader will pee their pants.

Number 22: Because you get to make or work with someone who makes awesome illustrations - potentially covering up the fact that your story is really only mediocre. And if the illustrations aren't awesome, you still bring joy to the world by getting to be thrown at the wall. Either way, you win!