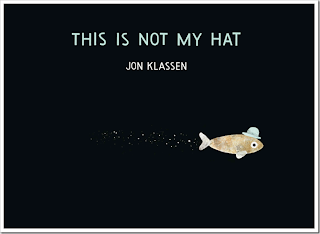 For those of you who haven’t read it yet, Klassen’s story is told from the point of view of a fish who just stole a hat. The offending fish openly admits to the crime and gloats about it throughout the getaway.  His boastful narrative is coupled with illustrations that show the original owner of the hat, a rather large and brooding fish, waking up and beginning his chase.
The book is notable for the disconnect between the narrative and the illustrations.  With the first person/fish narrative cleverly juxtaposed against the incongruent illustrations, the reader quickly realizes that their narrator is unreliable delusional, and ultimately doomed.
This is pretty complex stuff for a picture book.  Pulling it off required a deft touch with pitch-perfect timing and pacing.  Klassen manages it well and with illustrations that conjure up the classics of Leo Lionni, albeit updated with a morbidly modern sense of humor.
So what is it about “This is Not My Hat” that strikes a particular chord today?
It’s a little early to tell, but perhaps it will be seen as a turning point in children’s literature where the industry pivoted towards a media-savvy generation so highly attuned to irony that it could handle deconstructing text at even the youngest ages.
Or maybe it’s resonates with people as a reminder of the ever blurring boundaries between public and private life--that despite how much you delude yourself into thinking that you’re in the clear, your transgressions, no matter how small will eventually surface and devour you.  (I’m looking at you, sext-happy politicians.)
Or maybe it’s something much less ominous, like … bowler hats are about to replace fedoras as the coveted hat choice of the fall fashion season.
Check back with me in another 75 years and I might have a better answer.
at 8:58 PM

Thank you a lot for sharing this with all of us you actually know what you're talking about! Bookmarked. Kindly also talk over with my website =). We could have a hyperlink alternate arrangement among us!outdoor led signs

There are many celebrities who has the same birthday as you. Don't believe me, all the proof can be found on celeb networth