Nerds and neanderthals, playoff edition: A literary guide to the 2012-13 NFL postseason 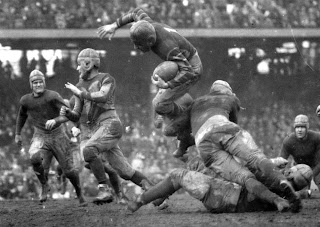 
In the preseason, we brought books into the locker room by identifying literary parallels for the 2012 NFL season. As the weeks rolled by, each unforeseen twist revealed a new storyline and unexpected characters emerged from the sidelines to assume pivotal roles in this final chapter of the season. With the regular season in the books and the playoffs about to start, now is the perfect time to reevaluate. So, as these modern-day gladiators take to the field (and the rest of us plop down on our couches), here is another literary guide to help prepare you for playoff action.

1. Denver: The Peyton Manning gambit has worked out better than anyone could have expected. However, some wonder if the Broncos' success is largely illusory and mostly the result of a weak schedule. Are the Broncos capable of closing the deal on this miracle season or are they really just chasing a mirage through a desert of mediocrity?
Literary Equivalent: "A Hologram for the King" (Dave Eggers)

2. New England: It used to be assumed that Tom Brady and Bill Belichick could do no wrong come playoff time. While their powers remain strong, the veneer of invincibility has slowly worn off. As year after year they fall short of a championship, even the most diehard fans have been forced to accept their heroes’ flawed humanity.
Literary Equivalent: “Twilight of the Superheroes” (Deborah Eisenberg)

3. Houston: Perhaps the biggest mystery in the playoffs, the Texans were an early-season juggernaut before things took a wrong turn and they started losing one game after another.  As the situation around them continues to erode, they can only wonder if they have any chance of survival.
Literary Equivalent: “And Then There Were None” (Agatha Christie)

4. Baltimore: As offensive coordinator Cam Cameron failed to deliver up to expectations, the Ravens grew weary and decided it was time for him to go.   Will deposing the head of their offense make everything right or are more executions lurking in the near future?
Literary Equivalent: “Bringing up the Bodies” (Hilary Mantel)

5. Indianapolis: After an improbably heartwarming season that resembles a made-for-TV drama, you can’t help but root for the Colts as they rally around coach Chuck Pagano and his fight against leukemia. For those of you who wish there was a sixth season of "Friday Night Lights," this is as close as you’re going to get. In fact, the only possible way for this to end is with a showdown against former Colt Peyton Manning in the AFC Championship Game.

Manning has the ball at first  nd goal as the game clock ticks down to zero, but he inexplicably calls timeout and walks off the field. He walks over to the Colts sideline and shakes hands with Andrew Luck as they both agree to stop the game and declare a tie. Pagano chokes back a tear and looks over to his wife in the stands who rises to lead a slow clap that spreads through the approving and now raucous stadium.  Fade out to Coldplay’s “Fix You.”
Literary Equivalent: “Friday Night Lights: A Town, A Team, And A Dream--as adapted for TV” (Buzz Bizzinger)

6. Cincinnati: With a stout defense led by underrated tackle Geno Atkins and a transcendent talent in wide receiver A.J. Green, the Bengals seem to have a bright future ahead of them. The question they now face is this: As they try to move forward, do they shed all vestiges of their franchise’s complicated history and try to start with a clean slate, or do they embrace their painful past?
Literary Equivalent: “The Piano Lesson” (August Wilson)

1. Atlanta: The Falcons have been one of the best teams in the regular season, but they know that to gain any measure of love and respect, they have to come through when the passions run high in the playoffs.  With past disappointment still fresh in their minds, the Falcons make another overture to NFL immortality knowing full well that they also flirt with possible heartbreak.
Literary Equivalent: “Twenty Love Poems and a Song of Despair” (Pablo Neruda)

2. San Francisco: Switching from Alex Smith to Colin Kaepernick is the equivalent of switching from a Volvo to a Ferrari.  Either Jim Harbaugh will be vindicated by success and hailed as a bold visionary, or he will be remembered for a needlessly reckless move that led his team headlong into disaster. Regardless, 49ers fans are in for quite a ride.
Literary Equivalent: “Crash” (J.G. Ballard)

3. Green Bay: Despite their continued success, the Packers have left many people scratching their heads.  Whether success has left them complacent, or they feel burdened by the weight of expectations, they just can’t quite seem to capture the magic of their previous endeavors.
Literary Equivalent: “The Casual Vacancy” (J.K. Rowling)

4. Washington: With uncommon poise to match his prodigious talent, rookie Robert Griffin III deserves all the praise he gets. However, the team’s fortunes may ride just as much on their unassuming and bruising rookie running back Albert Morris. As this unlikely duo rushes forward into the future, they must be careful because they hold the fragile hopes and dreams of a delicate fanbase in their hands.
Literary Equivalent: “Of Mice and Men” (John Steinbeck)

5. Seattle: The Seahawks may very well be the most feared team heading into the playoffs, but they remain vulnerable away from home. Can Russell Wilson and his crew survive an extended road trip and return home victorious?
Literary Equivalent: “The Odyssey” (Homer)

6.  Minnesota: Adrian Peterson is a once-in-a generation talent. His ability to not only overcome a devastating knee injury, but to nearly break the NFL rushing record in the process have many people wondering if he is even human. But such greatness will not last forever, so instead of trying to make sense of his superhuman feats, we should just sit back and enjoy the privilege of watching an artist at the height of his powers.
Literary Equivalent: “Both Flesh and Not” (David Foster Wallace)
at 12:20 PM