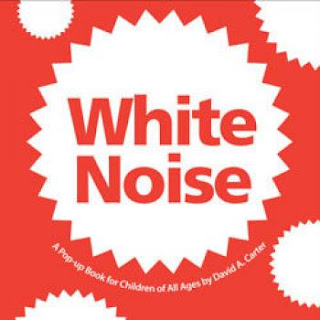 While none of the publishers seem to acknowledge the connection, it can’t be a coincidence that White Noise, David A. Carter’s brilliant new pop-up book, just happened to be published on the 25th anniversary of Don DeLillo’s postmodern classic by the same name. (Okay, it's probably a coincidence, but I’m plowing ahead anyways.)

You would have thought that adapting Don DeLillo's anxiety ridden novel for a picture book audience would be an impossible task... but if you’re familiar with Carter’s work, you’ll know that he eats impossible for breakfast. And once again, Carter delivers the impossible.

Carter has established himself as the grandmaster of the medium and his latest offering is a breathtakingly whimsical feat of the imagination, each page bursting with visual and sonic surprises (yes, I said sonic. The pages are cleverly constructed in a way so that they snap, crackle, and pop). Once again, Carter has pushed the boundaries of the pop-up book, elevating it from novelty act to work of art… and in this case, a metaphysical statement that effectively captures the nuanced anxiety of DeLillo's masterwork.

There are many themes running through DeLillo's novel, the most pervasive of which is the fear of death. All the characters in the novel are obsessed (if not consumed) with the unavoidable fact of their mortality. With this sense of impending doom invading even the most mundane activities, the characters are left with the lingering sense that the daily tedium of their lives (especially the solipsistic posturing of academia) is nothing more than a pleasant diversion from the gradual deterioration of our physical selves.

This concept brilliantly is captured in Carter’s book because (as all librarians know) the pop-up book is an essentially tragic instrument. The minute you open the book, you have begun to destroy it. With each pull and tug of the intricately constructed pages, the book inches closer and closer to its ultimate demise.

And yet, its very existence is an act of defiance. Knowing full well that it is not long for this world, the pop-up book is a bold statement that even if life is short, it is more than just an exercise in futility. Life may be just "a tangle of bits and pieces and tinkling white noise", but it can be darned beautiful while it lasts. 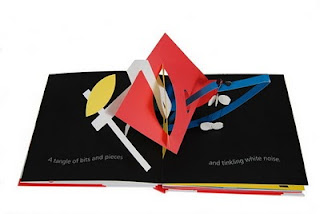 You could easily be making money online in the hush-hush world of [URL=http://www.www.blackhatmoneymaker.com]blackhat cpa methods[/URL], Don’t feel silly if you have no clue about blackhat marketing. Blackhat marketing uses little-known or misunderstood avenues to produce an income online.

You could easily be making money online in the underground world of [URL=http://www.www.blackhatmoneymaker.com]blackhat forum[/URL], It's not a big surprise if you don't know what blackhat is. Blackhat marketing uses not-so-popular or misunderstood ways to produce an income online.