The cool thing about writing random posts about children's books is that you sometimes you get responses from the author. That was the case with Jeff Newman, who emailed me after reading my post on Hippo! No, Rhino! Ever opportunistic, I took that opportunity to ask him for an interview. Over the next few months I fed him a steady dose of a question a month. (I was in the middle of getting ready for the wedding, so I was terrible on email. Luckily, Jeff was just coming off his own wedding, so he was understanding and accomodating. Phew! and Congrats!)

But enough from me. Without further ado, I give you: 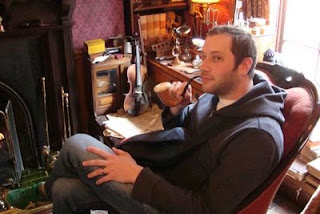 Question 1: When did you decide to pursue a career as a children's book author?

Well, I'm still not sure, with the number of books that I've produced since I started working in the industry in 2000, I could call this a career:) But to answer your question, I decided to pursue a career in children's books when someone agreed to publish one of mine! During my sophomore year of college, I took a picture book illustration class and a children's literature class, concurrently (in the latter, I wrote the story for Reginald, my first published book, and in the former I created the dummy for the same story). But I wasn't entirely sure if that was the route I wanted to take. I had a hard time deciding what to do, because I wanted to try everything (editorial, comics, animation). Then, after college, my girlfriend at the time, also an aspiring illustrator, got a job as an assistant to the art director at Random House Children's Books, so we moved to New York in the summer of 2000. She came home from work one day and told me that she'd taken my dummy for Reginald into Random House, and had shown it to some of the editorial staff.

A week or two later, I met with an editor for Doubleday, and we were on our way to turning it into a real, live book. I've been making books (albeit slowly), ever since. So, I never really decided to pursue this as a career--it just kind of happened. And I'm incredibly lucky that it did. I've always been driven to create, but the business and promotion angle of the illustration continues to make me uncomfortable. Thankfully, I've got an agent, now, so I don't have to deal with the business aspect quite so much.

Question 2: Since Hippo! No Rhino! isn't exactly your conventional kid's book, did you have any trouble convincing the editors to go for it? 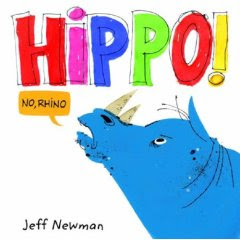 Not really; I mean, I did submit Hippo! to about three or four different publishers before it was accepted at Little, Brown. But that seems like a pretty low number, compared to other submissions stories that I've heard, especially since, as you point out, it's not a conventional kid's book. Those editors that showed some interest in the book, but ultimately turned it down, unanimously thought that the story needed to be "fleshed out". I felt strongly that it wasn't so much a story as an incident, and that it said everything I wanted it to say in that format. Luckily, the dummy made it into the hands of my editor, Alvina Ling, so I never had to discover what "fleshed out" meant. I'm pretty sure it would have involved adding more words, and maybe changing the title to Quiet, Little Rhino, or something like that.

After Hippo! arrived at Little, Brown, and all the way up through its publication, I never had any trouble convincing Alvina to go for it. I didn't have to, because we were on the same page from the get-go. If there was any doubt regarding the book's direction, I never heard about it. I just made the book I wanted to make, and I realize, especially now, how rare an opportunity that is. She protected it all the way.

Question 3: As a children's author, do you ever feel the need to self-censor yourself in your daily life? Or rather, do children's authors need to maintain a squeaky clean image in order to get published? (Note: I do not consider Madonna to be a children's book author.)

The funny thing about Madonna is, she's probably one of the few celebrities who (at least I get the sense) wrote her own stories because she actually believed she had good stories to tell. I'm probably being naive; she may have had a ton of help. But I read The English Roses, and I got the feeling that it was copied directly from Madonna's notepad, without any editor interference. That might explain why it's so damn long, and why it sounds better when you read it with a fake British accent. So what I'm saying is, you might actually enjoy it.

And since we're talking Madonna, the answer to your second question is no. Whether or not you consider Madonna an author on the grounds that what she makes is of dubious quality, technically, she is. That said, she's Madonna, and her reputation has (arguably) almost everything to do with her getting books published. But for the average author, I think that the books speak for themselves; whether you're "squeaky clean" or not only matters insomuch as you don't do a line of cocaine off of a publisher's desk when you first meet them, or get up in front of a group of kids and scream "f__k!"

Still, (and this is an answer to your first question) I do feel the pressure to self-censor from time to time, and it's almost always in the presence of other children's authors, editors, and various industry folk that I don't know especially well (especially librarians, for some reason). And part of it is just because I produce material for children, and providers of that material are under more scrutiny than those that make stuff for adults. Also, you never know who you're talking to. Is that author just a guy like yourself, writing (hopefully) funny stories for kids, or is it a behavioral psychologist that will make you feel ashamed for showing an older brother picking on a younger brother in one of your books, without showing some kind of terrible consequence for the older brother's actions, or someone that blushes when you say "oh my god" rather than "oh my gosh"? There are so many different levels of concern for the effects books (and by extension, their authors) are going to have on children (I'd be at a pretty low level, I guess), and I feel like they're all out there, personified. I'm probably just paranoid.

Thankfully, in my daily life, I don't interact with a lot of people that know I'm a children's author, besides close friends and family, and they definitely don't hold me to any moral standard (aside from expecting me not commiting a felony, maybe).

(Interviewers note: I apologize--I didn't mean to imply that Madonna was not a children's book author... I meant to imply that including her in the ranks of children's authors when considering moral behavior would be difficult because, I assume, she's an outlier. Though rumor is that Margaret Wise Brown was quite the wild child. But I digress.)

Question 4: So, assuming you can resist the temptation to commit a felony (and don't come down with a sudden case of Turret's Syndrome), do you have any other projects coming down the pipeline that we should be watching out for?

Yes, I do have a few books in the works. The first one, the one that I've been working on for just about two years (!) is called The Boys, and it was going to come out next summer, but now it's been pushed to summer '10. It's a book that has some association with baseball, so it was decided that it needs to be released during the baseball season. And I agree, it just bums me out that I have to wait that long to see it in print. The reason it got bumped from the '09 season is threefold: the first reason is because I suck at using a paintbrush, and all the "outlines" in The Boys are brushed rather than inked (maybe one of the best/worst ideas ever). The second reason is because the page count was upped to 40 pages from 32 (I still have a few pages left to do, in fact), and the reason for that is the third reason it was delayed: it was soooo hard to make this story work without words. But I have to say, all the effort was worth it. I think. I hope.

And then I'm illustrating Aaron Reynold's The Carnivore Club for Chronicle Books, followed by Joseph Bruchac's Rabbit's Snow Dance for Dial Books. And some point, I'll be making (i.e. both writing andillustrating) my fourth book for Simon & Schuster.

Grand (Random) Finale Questions:
1) If you could choose any person (living or dead) to narrate your life story, who would that be?
2) What song would you want playing at the end of your life story after the screen faded to black and the credits started to roll?
3) In the DVD version of your life, what would be one of the deleted scenes and/or special features?

Now...I could pick someone at random to narrate my life story, but I don't have anyone in particular in mind. Also, I'm not sure what kind of special features the DVD of my life would have besides a commentary track of me sighing at every stupid thing I've ever done and said. But I do know my "final" song, and it's Holy Grail by Badly Drawn Boy. And yes, I have put a lot of thought into it prior to being asked the question, which I guess is kind of sad, but being as it's one of the last choices I'll make, I figure I better make the right one.

Oooooo... good song choice. Unfortunately, I couldn't find a clip of that song on YouTube, so I'll end the interview with another Badly Drawn Boy song... Thanks for the great interview, Jeff!

Email ThisBlogThis!Share to TwitterShare to FacebookShare to Pinterest
Labels: Live From the Bottom Shelf Interviews

Good stuff! Jeff rules. Love the Madge back and forth.