Winner of the 2005 Teacher's Choice Award, Moss's book is a quietly powerful tale about silence in the face of bullying. A popular girl turns a blind eye to bullying and teasing until one day she becomes the butt of the joke. This is an adaptation of the powerful poem First They Came by the Pastor Martin Niemoller. Niemoller's poem (an indictment of complacency in the face of rising Nazism) admittedly dealt with more serious issues than junior high bullying... but the basic premise remains the same.

Note: The book is extremely well done... until you get to the appendix. After the story, there is a guide on strategies for dealing with bullying. One section says:

If you are bullied, speak up! Things to say are: "Please stop." "That hurts my feelings." "I haven't done anything to you." Don't be afraid to tell an adult.

Ummm... yeah, right. Follow that advice and there's a good chance that you will either get laughed out of the gym, or pummeled on the playground. While the Say Something approach is well-intentioned, a better strategy (at least for guys) may be to use the Say Anything method: 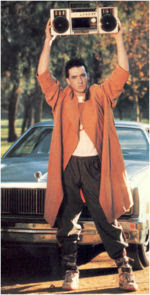 1) Take up kickboxing. Tell people its for your own self-satisfaction or to impress the ladies... but really it's just so that while you're getting your ass whooped by jocks, you can at least get one kick in before the ambulance arrives.

2) Wear a trenchcoat. Yes, it's weird and kinda creepy, but do it on the off chance that people will think you're eccentric or mysterious.

3) If you want to get the girl, embarrass yourself with an overly dramatic public demonstration (see picture above). This is NOT optional. Why not? Being a bumbling doofus, you don't have enough going for you to hold anything back. So set your pride aside and put it all out there. It's your only hope.

4) Star in a cheesy but endearing romantic comedy that will ruin the lives of guys everywhere (especially bullies) by warping the romantic expectations of all women who lived in the 80's, thereby sabotaging the relationships of all men (and making Chuck Klosterman's head explode). That's called having the last laugh.
at 9:00 AM

Email ThisBlogThis!Share to TwitterShare to FacebookShare to Pinterest
Labels: Aalphabetical: S, Judging a Book By Its Cover, Kids These Days, Lights-Camera-Action, Nonfiction, That Many Splendored Thing

once again, you've outed yourself, this time as a chick-flick viewing male. though i will say, Say Anything might be one of the few chick-flicks that guys actually gain points for having watched, and potentially benefit from (the movie providing their minds with the continuously running mantra of "don't just be a guy...be a man.")

can you think of other chick flicks that fall into this category of making males into a better species? let's brainstorm!

For the record, I boycotted the ultimate chick flick (The Notebook) for over 3 years. and when I finally did watch it, I fell asleep.

I think this makes up for the fact that I will drop everything and watch Clueless whenever it appears on TV.

Godfather II is NOT a chick flick. I was thinking more along the lines of "About a Boy," and how no man can remain an island forever.

No man can remain an island forever?

I beg to differ... i mean, have you seen The Girls Next Door?

Hugh Heffner has remained an island well into his 80's... an island floating in a sea of blondes 1/3 his age, where Viagra grows on trees.

I'm not saying he's what we should be aiming for... but he is the exception to the rule.