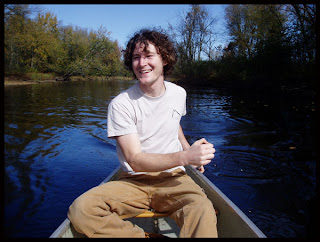 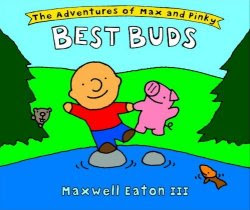 In an unprecedented coup, children's book author/illustrator Maxwell Eaton III has agreed to an interview with Bottom Shelf Books. His willingness must have something to do with the fact that he and I share the same birthday (October 13th! Same day, different year).

To prepare, the Bottom Shelf Interns worked tirelessly around the clock compiling a series of pointed, pointy, and pointless questions. So without further ado, we are proud to present a 7 question foray into The Mind of Maxwell, author of The Adventures of Max and Pinky.

BSB: In your books, Pinky has an obsession with Marshmallows--is Pinky's addiction to marshmallows reflective of your own personal affinity for the smushy treat? (If so, how often do you go to the dentist?)

ME-III: I'm a sucker for most anything containing sugar but, like Pinky, have not learned moderation. And as far as marshmallows go, I'm eating them on the recommendation of my doctor who says that I'm not getting enough modified corn starch and tetrasodium pyrophosphate. Mmmm.

BSB: Which character in your books do you relate to the most?
a. Max
b. Pinky
c. Chicken Number 3 who makes a cameo appearance on Page 8 of Best Buds
d. None of the Above
e. This is a stupid question and I have lost all respect for you because you asked it. This interview is over!

ME-III: I admire Chicken Number 3's boldness. He won't accept "Move your feet, lose your seat." This isn't school bus rules! He spent the better part of an afternoon making the perfect nest. Little bit of straw, some alfalfa lining, touch of clover, maybe some stray feathers. He leaves for five seconds and somebody has moved right in! Being a chicken, his memory, sight, and problem solving skills aren't quite as sharp as they could be, but I'll be darned (that's right, darned) if he isn't going to pursue this matter to the best of his ability. That's the real message on that page. That, and Pinky is silly. One page, two messages. You just doubled your money.

BSB: What's up next for Max and Pinky?

ME-III: What's up next for Max and Pinky? What isn't up next for Max and Pinky! This fall they will be starring in their newest adventure SUPERHEROES. The only thing these two love more than marshmallows and one-man puppet shows is throwing on the ol' capes and saving stuff from stuff. A little snow monster battling, some whale saving, and an asteroid interception here and there to ease into the day. But we'll see what happens when Max let's all of these powers go to his head and it becomes Pinky's turn to save the day (A real teaser!).

Then we've got THE MYSTERY which will be out in the Fall of 2008. There's something going on around the farm and Max and Pinky are determined to get to the bottom of it! Also, watch out for a book outside the realm of the pig and the bald kid called LITTLE BOOGERS. I'll let you use your imagination.

BSB: Which duo would win in a tag-team wrestling match? Max and Pinky or Charlie Brown and Snoopy?

ME-III: There's an image for the kids. Look, I don't want to go into too much detail, but I think it all comes down to youthful vigor vs. tried and true experience. How long have Charlie Brown and Snoopy been around, over 50 years? They're the oldest eight-year-olds on the block, and I think they've learned a thing or two in that time. They've got that edge. But you just can't rule out Max and Pinky. A couple of characters with nothing to lose and everything to gain. Place your bets!

BSB: If the world were about to be overrun by an army of heartless aliens with eyes that shoot red-hot lasers, and it was up to you to convince them that humanity had redeeming qualities worth preserving by showing them one picture book that truly demonstrated our worth as a species... what would that book be?

ME-III: It's funny, because this actually happened to me once… I'd rather not talk about it…

BSB: What would you rather win: an Oscar, an Emmy, or Jeopardy?

ME-III: Probably an Oscar. Because with those pointy lightening bolt wings an Emmy has lawsuit written all over it. And as far as Jeopardy goes, it isn't about the money. Children's book authors don't have a lot to worry about in that department. Let's just say I'm considering buying new shoes this year.

BSB: If you could choose, what would you want to be reincarnated as?

ME-III: I would definitely come back as a wolf. It would be great to be celebrated on so many fine pieces of air-brushed velvet art at carnivals all over the country! Just think of it!


You heard it here first, folks! Many thanks to Maxwell "The Velvet Wolf" Eaton III for being the first author to visit the Bottom Shelf. (Note: The Velvet Wolf is a nickname I just came up with, but I'm hoping it sticks because it is badass. If it does, I want full credit... in the form of a 35% share of the profits from all Max and Pinky merchandise.)

Stay tuned for next week's Author Interview when we use a Ouija board to interview the spirit of Dr. Seuss. (Assuming he's still not too busy turning over in his grave because of that horrid Cat in the Hat movie.)

And if any other authors (living or dead) are interested in a BSB interview, email bottomshelfbooks@gmail.com and we'll do our best to shoot some goofy questions your way.

Email ThisBlogThis!Share to TwitterShare to FacebookShare to Pinterest
Labels: Aalphabetical: M, Live From the Bottom Shelf Interviews, With Friends Like These...

What a cop out by Eaton. Can't pick a picture book? Or maybe he was too embarrassed to admit he picked an issue of Penthouse.

Question: are you currently slaving away in field harvesting the organs of your fellow humans under the watchful laser shooting eye of an alien guard?

I didn't think so. So whatever Eaton chose, apparently it worked, so you should be grateful!

actually... you are in med school, so maybe you are slaving away harvesting the organs of your fellow human beings under the watchful laser shooting eye of an alien med school professor... so maybe you have a legitimate beef. oh well, sucks to be you!

p.s. Baltimore is for losers.

https://goodstyle.app/ on oversized clothes, they're trying on oversized emotions and roles that preview and help prepare them for the world that awaits.