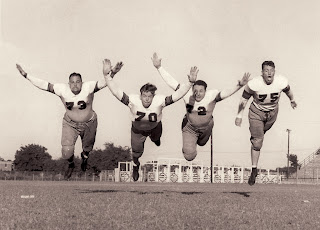 America makes a clear distinction between bookish types and football types. The Nerd vs. Neanderthal dichotomy is a cornerstone of American culture (at least in American culture as presented in high school TV shows).
But the truth is that football and literature do not occupy separate realms. As any fan knows, football is driven by drama of the game. Each week’s contests are served up with a mythological importance: Epic battles between the forces of good and evil; tales of impossible redemption colliding with heartbreaking falls from grace; traitors conspiring in the shadows of egomaniacal tyrants. And all of that is just on the New York Jets.
So to help you make sense of this upcoming season, here is a literary guide to the 2012 NFL season, wherein we identify some of the most compelling storylines and narratives from each team and its literary equivalent.  While only one team’s season will have a truly happy ending  —every team will emerge with a few good stories to tell.  (Read more here at Page Views)

Good write-up, I’m normal visitor of one’s website, maintain up the excellent operate, and It is going to be a regular visitor for a long time. eyebrow embroidery Singapore

Hey very cool blog!! Man .. Excellent .. Amazing .. I will bookmark your web site and take the feeds also…I am happy to find so many useful information here in the post, we need develop more techniques in this regard, thanks for sharing. . . . . .jaeger lecoultre melbourne