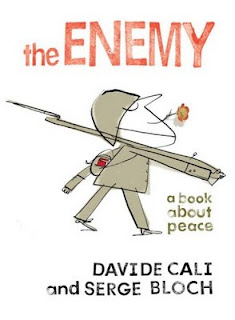 This unique book begins with a soldier in his lonely foxhole facing off against a mysterious opponent. His military-issue manual describes the enemy as dangerous and inhuman, and it is this ruthless and menacing description of the opponent that steels the soldier's resolve during combat. It is a simple matter of kill or be killed. As the war wages on, our soldier eventually sneaks into the other foxhole and discovers that his enemy may not be the monster that he was made out to be. The book ends with the two soldiers reaching out to each other, cautiously hopeful that they can end the fighting.

In April, Meghan Cox Gurdon of the Wall Street Journal had this interesting take on the book:

This book is very stylish, but it's pure propaganda: The idea is to perplex children about why war should ever happen and invite them to believe that nothing is worth fighting for -- when adults should know better.

While I'm all for healthy skepticism, I think that there is more depth here than Gurdon realizes. While the book does not hide its antiwar message, there is another message here that is a little more nuanced than War is Bad or (in Gurdon’s words) that “nothing is worth fighting for.”

This is where the underlying message of Cali's book shines through. It's clear that these two soldiers were merely being manipulated from above and that "The Enemy" in this case is the faceless figure of authority that knowingly promulgated false information in order to justify and fan the flames of war.

History is riddled with examples of governments/movements manipulating information to justify war, and the decision to go to war is too serious for us to take information at face value. Cause if you don’t dig deeper, you may end up digging your own foxhole (or worse). It's not that "nothing is worth fighting for... but in order to know that something is worth fighting for, you have to know the truth.

Bloch’s illustrations do an amazing job of reinforcing this idea that information plays a large role in war. The illustrations take on the style of political cartoons, mimicking a popular vehicle for propaganda. But more interestingly is the way Bloch uses the page itself within the illustrations.

For example, the foxholes appear as torn holes in the page. (You should CLICK HERE to see images from the book, courtesy of the lovely ladies of 7 Impossible Things Before Breakfast). The page itself is the battlefield. This interplay between the page and the image further illustrates (pun sheepishly intended) that wars are fought not just on the front lines, but on the page: through newspaper editorials, policy briefs, political cartoons… wars are waged by words as well as by bullets and bombs.

So while I, like Gurdon, sometimes raise a skeptical eyebrow at overly simplistic anti-war literature, I don’t think that this is the case in The Enemy. Rather than perplexing children about "why war should ever happen", Cali's book tries to make them realize that if war should ever happen, you better make damn sure that you aren’t being duped into it.

I thought I was going to end it there, but a little digging on the internet revealed another interesting angle.

The Enemy was originally published in association with Amnesty International Australia in 2007. The original version features a highly decorated and smiling general (with sunglasses) below large print that says "Enemy". 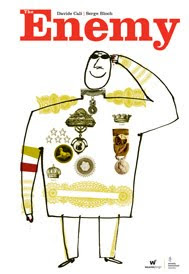 Before we discuss the illustration, note that this version does not have the subtitle: A Book About Peace. This is interesting because in her WSJ review, one of Gurdon's points is that,

"The Enemy: A Book About Peace," by Davide Cali, does not so much promote peace as repudiate armed conflict.

Which is a valid point and something that kind of bugged me too. But maybe it wasn't originally written as a book about peace at all. Maybe that subtitle was added on afterwards for marketing reasons. I wouldn't be surprised if US publishers were worried that a book about war would be too hard to promote, so they stuck the tagline "A Book About Peace" and switched out the diabolical general and slapped on a picture of an peacefully smiling soldier. Maybe that cover would be less likely to scare parents away.

Now let's look at the difference in the cover art. Interestingly, the smug general doesn't appear on the inside of the book at all. He remains above the fray (and outside the lines) making the decisions to send people to war. He only appears on the cover, which looks almost like a "Wanted" poster, a bold advertisement saying "This is the real enemy."

In fact, take a closer look at the illustration... it's hard to tell with this low resolution, but you can see that the general literally has blood on his hands.

So Gurdon was right about one thing: this is not a book about peace. This is a book about the horrors of war and the need to keep a close eye on those who have the power to declare it. Because it’s true: adults should know better. They should know better than to blindly accept jingoistic justifications for war without asking questions. After all, a knowledgeable public with the ability to question their leaders and hold them accountable is key to a healthy democracy. Anything that tells you otherwise is pure propaganda.

Email ThisBlogThis!Share to TwitterShare to FacebookShare to Pinterest
Labels: Aalphabetical E, Judging a Book By Its Cover, Serious Issues Packaged for Kids