In the Night Kitchen

Maurice Sendak's classic In the Night Kitchen, re-released as a memoir: 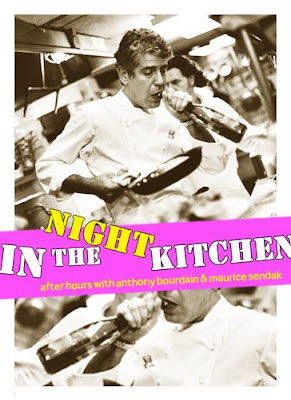 From Publisher's Weekly: Bourdain's latest behind-the-scenes memoir is another no-holds-barred adventure into the surreal underbelly of the restaurant industry. And never one to shy away from controversy, the rebellious Bourdain writes with two objectives in mind: shock and awe. There is one particularly bizarre scene involving full frontal nudity and getting "baked" in the kitchen that is sure to cause a stir among those with a more sensitive palette... but the rest of us should settle in for the meal of a lifetime. With Bourdain and Sendak in the night kitchen, you're guaranteed to have your cake and eat it too.

LOL. Thanks I needed that.

Ha ha! I loooove Anthony Bourdain, but shudder to think of him joining the ranks of celebrities-turned-children's book author. I also love the Pupa magazine below! I tried to come up with some other insect periodicals, but only came up with "Martha Stewart Larvae".

This is funny! Thanks.

Now, THIS is terrifying. I'm cool if the full frontal is of SENDAK, not so much Anthony...